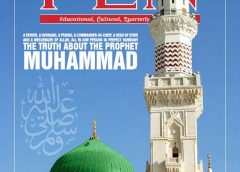 A father, a husband, a friend, a commander-in-chief, a head of stateand a messenger of Allah, all in one person in perfect harmony

Articles from this Issue

Think tanks, the collective intellect of society, producesystematic and specialized knowledge, which in turn means power. Read the article To achieve the goal of Halal around the world,the Muslim community have to act together. Read more

The truth about the Prophet Muhammad His Courtesy, Compassion and Altruism

His Conduct With People

His Courtesy towards the Needy

His Conduct with Women

His Advice aboutthe Rights of Neighbours

His Conduct with Criminalsand Captives of War

His Conduct With Animals

A story and what it refers to By Cemal ERSEN Husrev in his Ustad’s view By Metin UCAR

The portrayal of Ahmed Husrev Altinbasak in Said Nursi’s treatisesshows his significant place in the Risale-i Nur movement. Read the article Andalusian Muslims excelled also in Literature and affectedthe West here as much as they did in other fields. Read more Think Tanks and the Future of the Islamic World