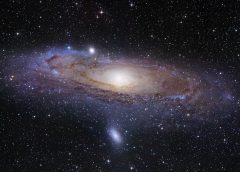 Since the beginning of human life on the earth there has always been groups of people along with the believers, who have been sceptic and have had controversial ideas regarding the belief that there is an omnipotent and omniscient creator who created the universe and settled down the earth for man and by that way he has been trying them so that it will be revealed who will obey Him and who will not.

The groups of ideas regarding the existence of god are several; other than theists who are absolute believers there are deists who hold the idea that reason and observation of the natural world provide us the opportunity to conclude that the universe was created by an All-Powerful being without applying any organized religion. Thus, they do not believe in a holy book, any prophet and the hereafter.

The other group of people concerning the existence of god are agnostics. The agnostics claim that philosophically humans can not know, penetrate and hold the Truth in any way and whether there is such a supreme power or not. Regarding the existence of a deity, within agnosticism there are agnostic atheists (who do not believe any deity exists, but do not deny it as a possibility) and agnostic theists (who believe a deity exists but do not claim it as personal knowledge).

The last group is absolute atheists who do not believe in any supreme deity and spread their philosophical ideas accordingly. In history of philosophy these groups of thought found their ways and different philosophers contended these ideas. We will specifically focus on atheists and their claims.

Throughout history atheism has become a marginal idea and very few people supported atheistic views. Yet, with enlightenment and secularization atheist scientists injected their atheism into science and they spread atheism with science. In this process, the evolution theory of Charles Darwin has provided the atheists with a great deal of argument in their fight with theists.

In fact, the science approves neither atheism nor theism because it is a sort of method to get knowledge about the physical world. Through scientific method we get experimental data about existence. Armed with this scientific information all groups of ideas may contend their argumentation. Thus, in this piece, I will try to show the incoherence and fallacy of atheism through logical argumentation.

Based on theory of evolution atheists claim that the living beings came into the existence through natural causes coincidentally and they form by themselves. This argument is totally inconceivable and impossible in numerous ways. Let’s get focus on the “forming by themselves” part of the argument.

Imagine the complex structure of human body which is not a simple, inanimate, or unchanging substance. On the contrary, the human body is like a perfectly well-ordered and continuously renewed factory or like a wonderful palace that undergoes continuous change and renewal. Innumerable particles are ceaselessly working in human body, which has connections and mutual relations with the universe, particularly in respect of the provision and permanence of human species. The particles in body are careful not to destroy those connections and relations. It is as if they consider the entire universe from the perspective of its relations with it and assume their positions accordingly. Therefore, if those atheists do not accept that the particles in human body are not tiny officials moving in accordance with the law of the Eternal, All-Powerful One, or the soldiers of one of His hosts, then each particle working in the eye would have to have an eye capable of seeing the whole of the body together with the whole of the universe, with which the body is connected and related. They would also have to ascribe to each particle an intelligence equivalent to that of a hundred geniuses; it would have to have the capacity to know the body’s whole past and future, its ancestors and descendants, the origins of the elements that form the body, and the sources of its sustenance. Attributing the consciousness and knowledge of a thousand scientists to an unintelligent particle is obviously misguided.

Even if we were to accept this idea, which involves as many impossibilities as the particles of a living being, even of the universe, it is infinitely far from explaining life and its origin, or the many immaterial faculties of a conscious living being, such as reason, consciousness, and willpower.

One thought on “A Fallacy of Atheism: Formation by itself”