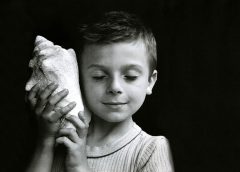 Allah (swt) mentions in the Quran, in Surah Dhariat, “I did not create the Jinns and the Human beings except for the purpose that they should worship Me.” (51:56)

Ibn `Abbas (may Allah be pleased with them both) has explained this verse, he has given the tafsir of it, that here, “that they should worship Me” means “that they should know or recognise Me”. That is, Allah created the Jinn and Man to know Allah, to recognise Him.

A similar idea is given in the tradition that Allah says, “I was a hidden treasure, and I wished to be known.” (Fihi ma Fihi, Discourses of Rumi Translated by A.J Arberry)

So, since our purpose is to know Allah, let us seek Him. With an attentive eye and an open heart let us listen to the whispers of all that is.

Let us first listen to the strong, powerful mountain. Unshakeable and unbreakable like a giant, towering over us. Must not its Creator be even more powerful than it?

Then the bright, blue sky declares the beauty of its Creator. Like a carpet floating above our heads with a shiny light, a brilliant yellow flower in the sky. We know the sky’s Creator is even more beautiful. Shouldn’t one know beauty and understand it if one wants to reproduce it?

The mercy, kindness and love of a mother to her child declares that the Creator of the family, has even more mercy, is even more kind and more loving. When we see the parents He provides, two servants rushing to fulfil a baby’s every need, it indeed inspires in us, Mercy and Love of the Creator – for those who’d care to listen.

When we lend our ears to the orchestra of foods He grants us, we again understand His Mercy and Generosity. Or how He turns the calamities in our lives, like seeds are sprouted in soil, to fruits giving many benefits, we again see His Compassion, His Affection and His Love.

Or when we observe the frightening power of lightning, together with the deafening roar of thunder, or when we see scenes of fiery volcanoes shooting missiles tens of kilometres away, striking their targets, or when we feel the very ground beneath us shake as if it was a child shaking before a fierce beast, or when we hear of a hurricane approaching, a terrifying demon destroying everything in its wake, or when we attend to the screams of terrified beach-goers head-to-head with a mountain range of water, rising like skyscrapers over them, when we evaluate the amount of power needed to spin gigantic planets, to slingshot them around even bigger suns, as if they are simple marbles, we know that the Creator, the Creator of all of this, is even more powerful than all the force that is needed in the entire universe – and that, yes, perhaps he must be listened to and treated with a sense of awe; otherwise, who could protect us from His Wrath?

We need not to look far to fathom the wisdom in our bodies, how our limbs are in perfect balance with each other, how our cells are like little cities, taking in nutrients and producing energy for us, ensuring our bodies fulfil all their numerous functions – all the while, each cell working in harmony with the other.

Our eyes, ears, tongues, skin and noses, all have correspondence with our minds, feeding it information – and our minds process all these personal messages, like a supercomputer, generating something as abstract as a thought. What is a thought? An idea in our minds, something we cannot touch, we cannot feel but it is so real, that with it, with an idea, wars can be declared, crimes committed, cities built, and civilisations constructed. This is the power of a thought, which our minds produce thousands of, every, single day.

All this order, all this wisdom in just our bodies. What about the entire universe!? Then what is the wisdom of the One Who has given us this power to think, to act on our ideas, what is the Wisdom of Allah, Who created so much wisdom we see in the universe around us!?

What about the size of the moon and its distance to the earth and how it affects the levels of the tides in the oceans? And the heat of the sun affecting the water that forms clouds that falls on the soil that grows the trees that give us the fruit that we can eat and benefit from.

We see that the insects of the Earth are busying themselves in cleaning up our waste and the waste of other animals to keep the world clean and pure. We see that trees are factories working for us, producing oxygen while also cleaning up the potentially harmful, carbon dioxide waste that we produce.

We also see that the air, the atmosphere around us transfers this oxygen to us and carbon dioxide away from us, and the air delivers sound so we may communicate with each other, and the same atmosphere is a blanket protecting us from the harmful rays of the burning sun, and the same air drives clouds to irrigate dry and dead lands bringing them back to life, and the same air cools us down on the days when the sun scorches us, and the wind, that generous friend also turns our windmills which we used in the past to grind our wheat or pump water but we use now to transfer into electrical power.

But the wind has no power of its own. The real Generous One is its Creator, and the Creator of all the amazing complexity and interworking in the Universe. What Power and Knowledge He must have to make this all work, the way He does!? The universe is a complicated puzzle, the more we know about it, the more complicated it gets. Like an endless series of concentric circles of deepening complexity pointing to the Infinite Nature of its Creator.

The beauty of the world around us is tugging at our souls so we may pay attention. That brilliant blue sky scattered with stunning clouds, as if made of cotton, every moment changing into a new design, a new show. And when the day passes, Allah replaces it with stunning stars of penetrating light so we may never be left with a dull or boring moment. What art within art, what creativity, what ingenuity!

The animals. The beauty of the magnificent lion, ferocious in its majesty. The slender gazelle, with the shyness of a woman, runs through the forest, like a precious pearl, it is difficult to grasp, but what wonder does it inspire in our hearts when we finally lay our eyes on it. The peacock, when it expands its wings, mesmerises us with its one thousand eyes, we are as if frozen in time when it begins its spectacle; we don’t know whether to stare at its wings or its fountain like neck with its brilliant colours and its flag-like crown. The awesome eagle – falling with complete devotion from the highest mountain like a shooting star having complete trust, complete tawakkul in its Lord, and its Lord indeed catches it and brings it up again, higher than before.

And who can forget the beautiful streams of water, flowing like ink on the pages of Allah’s canvas. Flowing down from the ink pots of mountains, capped with pure, white snow.

And the thousands of different types of food He has prepared for us, each looking like a masterpiece and smelling of paradise.

The honourable, ancient trees, with their hundreds of leaves; in the wind each leaf becomes as if a tongue, praising Allah, in a mesmerising show of humility and applause.

Look even at the most beautiful artworks created by man, then know that Allah created the mind that created the artwork. Allah created the minds that created that stunning Lamborghini, or exquisite Ferrari, or put together that smartphone in your hands, or constructed mind-boggling super-structures or transformed empty land into mega-cities. And although man has the freedom to err, there is no deficiency in the creation of Allah – only Wisdom that we do not see.

And so Allah Creates, He Beautifies, He Proportions, He Designs, He Orders, He Sustains, He Plans, He Surrounds, He Empowers, He Preserves, He Destroys, He Shapes, He Opens, He Closes, He Restricts, He Extends, He Reduces, He Elevates,  He Hears, He Sees, He Judges, He Knows, He Forgives, He Responds, He Loves, He Protects, He Originates, He Restores, He Gives, He Takes, He Postpones, He Waits, He Shows, He Hides, He Retaliates, He Scatters, He Joins, He Prevents, He Dominates, He Conquers.

Since He is Manifest to such extremes, even in the simplest thing, we can see His signs. Like a blade of grass, beautifully green, cushioning our footsteps when we walk on its carpet, providing a home and shelter for insects, holding the soil together to stop the wind from snatching it away and providing food to our cattle and sheep, turning into delicious meat we can enjoy. From grass to meat – a miracle of Power and Generosity we have become deaf to.

The world is an amazing place but only when it tells us about its Creator. Of itself, the world has no value; less than the wing of a fly, something that exists today but tomorrow, not. Yet, when we see everything as pointing to its Creator, then that same fly’s wing becomes an encyclopaedia speaking a little of the Magnificence of an Eternal Originator, full of Love, speaking to you in many tongues, calling you that you may pay attention and lend an eager ear to hear the whispers of all that is.