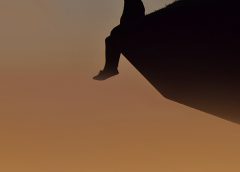 Those who saw that a lame ant was preparing as if it would take a long road trip asked ‘What gives? Where are you going?’

The ant replied ‘I am going to hajj’. Those who heard of that said ‘You do not have enough life span for it.’

The ant gave a reply which has become unforgettable throughout history.

Throughout our life we have difficulty in deciding between gaining the consent of Allah and our desires. This is our exam. However, our aim and intention should be to gain the consent of Allah. Besides “The value of a man is as much as his effort for his nation.

Whoever endeavours for his nation is a nation himself.’’

Of course, our aim should be great! Our intention has to be for the sake of Allah whatever we will do.

The one who turns the impossible to possible is Allah.

And also, the actions depend upon intentions.

And also we are responsible for effort and help comes from Allah.

We are not sure whether we can succeed in whatever we do but at least we can make sure that we endeavour and strive to achieve it. Allah knows all the intentions in people’s hearts.

To strive is our job and the victory belongs to Allah.