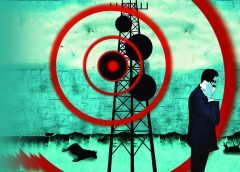 The use of technology has influenced human health in positive and negative ways. Along with its facilitating daily life, it also makes the diagnosis and treatment of illnesses easier. However, new problems have appeared such as waste products, radiation and electromagnetic waves, and, as a result, new health problems are now being identified.

Today the use of mobile phones are increasing, everybody uses one or even two phones. There are more phones than the number of people living in a house and base stations are placed on the top of apartment buildings. In such a time, the mobile phone and related health problems have become a public health concern. The fact that the use of mobile phones is on such a scale has resulted in a small increase in side effects that may influence the health of thousands of people.

The negative effects of the base stations have been given prominence by means of the media. However, exposure to the radiofrequency radiated by mobile phones is one thousandfold more than the base stations. Therefore, the real danger is in our houses.

The side effects of these radiofrequency and electromagnetic waves spread by mobile phones are evaluated as cancers and other health problems. Its cancerogenic effects were often emphasized when mobile phones first started to be used. However, research has shown that it did not cause brain cancer with long term use.

The following are the precautions you can take to be protected from the negative effects of mobile phones: