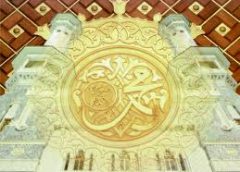 It is obvious that as human beings, we are eager to dignify our beloveds and ready to criticise our enemies. The reason behind this is, undoubtedly, our emotions “love and hatred”. However, we are not only composed of emotions but mind as well. In order to make an objective criticism, we need to disregard our emotions and use our mind. Particularly, when it comes to find The Most influential Man in History, finding the correct person among billions of people, using our emotions would mislead us to find millions of different people as the most influential.

Michael Hart, author of “The 100 – Ranking of Most Influential People in History” made his choice and used his mind to find him. Even though he is a Christian, He couldn’t close his eyes against to the Sun of our spiritual world (PBUH). He put Jesus (PBUH) in 3th place of the list whereas he put The Prophet Muhammad (PBUH) in 1st place.

“The real virtue is the one approved by your enemies…” This sentence from Risale-i Nur Collection explains a lot to us. Micheal Hart is, obviously, not the only one who appreciates the virtues of the Prophet Muhammad (PBUH). We all know from the history that not only Muslims but also Non-Muslims called The Prophets as “Muhammad al-Amin” which means “The Trustworthy”.

“I have always held the religion of Muhammad in high estimation because of its wonderful vitality. It is the only religion which appears to me to possess that assimilating capacity to the changing phase of existence which can make itself appeal to every age. I have studied him – the wonderful man and in my opinion for from being an anti-Christ, he must be called the Saviour of Humanity.” (The Genuine Islam,’ Vol. 1, No. 8, 1936.)

Mahatma Gandhi’s statement below is one of those confesses:

“I wanted to know the best of the life of one who holds today an undisputed sway over the hearts of millions of mankind…. I became more than ever convinced that it was not the sword that won a place for Islam in those days in the scheme of life. It was the rigid simplicity, the utter self-effacement of the Prophet the scrupulous regard for pledges, his intense devotion to his friends and followers, his intrepidity, his fearlessness, his absolute trust in God and in his own mission. These and not the sword carried everything before them and surmounted every obstacle. When I closed the second volume (of the Prophet’s biography), I was sorry there was not more for me to read of that great life.” (‘Young India’, 1924)

The truth way of the Prophet Muhammad (PBUH) is appreciated by all Muslims and Non-Muslims who are able to make an objective criticism. The history has never seen such a brilliant man before and never will.

Million of thanks to Allah SWT that he made us Ummah of his Beloved (PBUH) and Millions of peace and blessings to Him (PBUH) whose Mercy for Ummah is dignified by the Holy Qur’an. May Allah SWT.