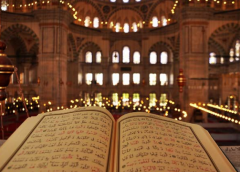 The death of righteousness and honesty in social and political life, the fact that some people can be terrorized easily, that all the ugliness of bad morality can be felt in every circle, that some strong people crush and kill the weak people without suffering, that the oppressed cannot get their right properly; that the minors do not respect the elders, and the elders do not have compassion to the minors, that people smile upon each other but dig a pit for one another, that great sins, such as drinking, gambling, adultery, unfair earning, theft, and murder become ordinary things; that all immorality and disgrace are committed publicly without shame; that the mischief that divided Muslims and made them enemies to one another, such as racism and sectarianism, occur; and many more.

It is possible to extend the list much more. Behind all these bad consequences is “the will” to do. Behind the will to do, there are feelings like hostility, envy, bias, brutality, anger, lust, greed. And behind these feelings there are wrong rules, deviated ideas, corrupt beliefs and ideologies of falsehood.

It is precisely at this point that the following statements of Imam Bediuzzaman Said Nursi in the 16th Flash must be well understood and taken into consideration in the solution of the problems: “The greatest danger to the Muslims in this time is hearts becoming corrupted and faith becoming defective because of the misguidance [deviated ideas] arising from modern sciences and philosophy. The only solution in these circumstances is light, and making light visible, in order that hearts be repaired and faith be saved.”

If you pay attention, you will realize that Imam Bediuzzaman does not count the sins, disgraces and immoralities that we have listed above as the most important danger of the time. Because all that are in the list are the result. The most important danger of the time is that – before these evil consequences – the hearts that give rise to these results are distorted by deviated ideas and that the faith is damaged.

Imam Bediuzzaman states in the Damascus Sermon that the Islamic faith leaves a permanent prohibitor in the heart and mind, and that when evil desires and inclination (i.e.will) start, the faith in the heart and mind comes and says ‘forbidden!’ and thus causing that evil escape.

Moreover, if the faith is damaged, he declares that the prudence (the ability to perceive) that comes from faith will disappear, that the person will not be able to distinguish his friend and enemy, that he will think that his enemy who drains his life-blood and drinks it as his friend, and as a result, he will be open to all kinds of trickery and deception.

Deviated ideas and ideologies of falsehood first put out the light of faith in hearts and minds. The emptiness caused thereof is filled with disbelief and misguidance. When disbelief and misguidance enter a heart, all the sacred and moral values ​​leave that heart. A person who does not believe in divinity and disregards moral values ​​is invaded by all the bad feelings such as hostility, animosity, hatred, envy, bias, racism. Nothing but mischief and evil emerge from such people who have these feelings.

Of course not. If there was a strong and firm faith in all hearts, it would be possible to prevent these by reminding the punishment in the hereafter against those crimes, immorality and atrocities. Interest in good deeds, good morals, and worship would have increased by giving good news that what kind of reward would be bestowed in paradise in return. But, as we have stated in the analysis at the beginning, beliefs and ideas are at the core of the behaviours, that is, all actions and behaviours. Just as if the foundation of a building is weak, it always faces the danger of demolition. It does not give you confidence to live in. And just as if one starts buttoning up his jacket with the wrong buttonhole, all the other buttons will be buttoned in the wrong order. Similarly, if there is a weak and incomplete faith in the foundation, it is an inevitable end that all kinds of immorality, cruelty and disgrace take place.

Priority should be given to the firm rooting and settlement of the principles of faith in mind and hearts, rather than the good deeds that are the result of faith. This is only possible with the correction of hearts. If there is weakness on the basis of faith and belief, all the activities of guidance will remain ineffective.