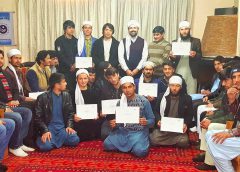 Having begun its educational activities in June 2015 in the capital Kabul, Afghanistan representative of Hayrat Foundation has organized many programs since then. In this short period of time, twenty five universtiy students have stayed in the Risale-i Nur educational centre and have benefited from the academic programs of the centre.

The students have studied different subjects from the Risale-i Nur every day. They have also read many epistles in daily reading sessions.

About one hundred students from different universities have attended the weekly Risale-i Nur lessons which have started in October 2016.

In semester break, our representative organized “the first academic winter study” with university students. The program included the Qur’an and tajwid training and the study of various subjects from the Risale-i Nur Corpus. At the end of this program the participants received a certificate from Hayrat Foundation Afghanistan representative and the Risale-i Nur educational centre.

Having attended the program, the head of the Turcology department of the University of Kabul, Mr Ataullah Deşti expressed his appreciation about the program:

In his closing speech, Afghanistan representative of Hayrat Foundation, Mr M. Sait Çetin expressed his satisfaction about the one-month-study. He said,

“The real purpose of all the programs we have in our centre is to gain iman al-tahqiq (the verified faith). Because the source of the problems in the Islamic world is the weakness of faith. In order to solve those problems we have to benefit from the Risale-i Nur written by Imam Bediuzzaman Said Nursi with a style proper to the understanding of the age.”

At the end of speech, Mr Çetin thanked the participants and said that the programs would continue and invited all the Afghan people to join the programs.

On behalf of the participant students Mr Nur Amed İmami said in his speech,

At the end of his speech he especially thanked Afghanistan representative of Hayrat Foundation for providing this educational opportunity.