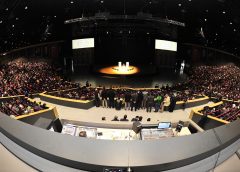 Imam Bediuzzaman Said Nursi was commemorated with prayers on the 56th anniversary of his death, in the event held by Hayrat Foundation and supported by the Municipality of Küçükçekmece, on March 27th 2016, in Yahya Kemal Beyatlı Performance Hall in Istanbul.

The program started with the Qur’an recitation of Abdulwadud Marega from Senegal. It continued with the introduction film of Hayrat Foundation.

In his opening speech, the mayor of Küçükçekmece Mr Temel Karadeniz emphasized the meaning and importance of the day, and said, “I am here today to show my loyalty to my Ustaz (Said Nursi).”

The vice president of Hayrat Foundation Mr Ahmed Semiz, in his speech, pointed at the stance which Nur students must continue as the inheritors of Imam Nursi:

“My dear brothers! Risale-i Nur students, who are not only in Turkey but all over the world today, never pursue worldly positions, ranks, and benefits. Their principle is the positive attitude. They work for the service of iman, which results in security. They take the consent of Allah (swt) as a goal with reference to the first principle in the Epistle of Sincerity: “There must be the consent of Allah (swt) in your deeds.” They do their own duties, but do not interfere in the will of Allah (swt).”

Joining the program from Bangladesh, the chairman of SAWAB Foundation Mr Rasheduzzaman said that they benefit from Risale-i Nur and emphasized that Nur students should continue service without a change in its essence.

Then a video about the life Imam Bediuzzaman was showed.

Students from Hayrat International Student Association, Yunus Ahmed from Sudan, Said Ilbodo from Burkina Faso, Hamza Talgatbek from Kyrgyzstan, and Muhammed Hazvan from Malaysia, who continue their education in Turkey, gave speeches in Turkish. Some highlights from their speeches:

“This service came with its costs; and we have some difficulties. But our elders told that our Ustaz Bediuzzaman and seniors paid the biggest part of the price for this service. We are guest students here in Turkey far away from our homelands. Ustaz says for this service that the youth in the end times should sacrifice not only their world but also their hereafter as well. So we need a strong iman. And Risale-i Nur is a great treasure that has the truths of iman. The jewelleries of the Qur’an are all in it.”

“Dear participants, I would like say this: I did not see Bediuzzaman. But I saw and met his inheritance; that is, his works and you (Nur students). Now there are many brothers who are students like me from many countries; Malaysia, Indonesia, Serbia, Syria, Senegal… Because of the vision, hope, excitement, and experience you have given to me, I wish all Muslim countries in Asia and Africa and all around the world to meet and know you. Then only then we live Islam. Please continue this stance of yours. May Allah protect it! May Allah let us know the truth as truth and obey it; and know the falsehood as false and escape from it!”

“The Risale-i Nur students that gathered around Imam Bediuzzaman remind us the companions (ra) around our Prophet (asw) in the first period of Islam. Those Nur students gathered around Imam Bediuzzaman for not worldly possession and position; they came together and took a stand to save the iman. And they did not say “Bediuzzaman died and the dawah came to an end.” On the contrary, their effort increased, and they spread Risale-i Nur in Turkey, around the world, and in Burkina Faso. Here I am, a result of this service, in your presence. I tell you this: “Oh Risale-i Nur students! Work! What is promised to you is Paradise!” Before I finish my talk, I would like give good news. We will open a branch of Hayrat Foundation in Burkina Faso. And I invite you there.”

“This brother of yours is from a country far away. I had the opportunity know dear Ustaz and benefit from his works in Kyrgyzstan. You can hide the truths, but you can never silence them. The voice of our Ustaz reached us there in Kyrgyzstan. How was he addressing? “Oh Saids, Ahmeds, Hamzas …” Alhamdulillah, we answered “Yes my Ustaz.” And now we try to be students to him.”

Then the following speeches were given:

Finally, the president of Hayrat Foundation, respected Said Nuri Ertürk gave a short speech. And he made the khatm prayer of the Qur’an, surahs, and salawats with Mustafa Döndüren.

Hazrat Ustad Bediuzzaman Said Nursi was commemorated with the participation of more than 5 thousand of his students who make effort to continue the service in sincerity without a change in its essence.