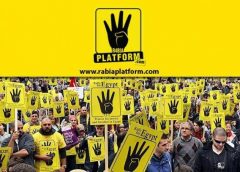 Dear members of the press,

As you know, Egypt’s army carried out a coup d’état against democratically elected President Mohamed Morsi and his administration on 3 July, 2013.

In response, Egyptians took to the streets to protest the military coup. Rabia al-Adawiya Square emerged as the center of demonstrations as they grew larger and more widespread, with participation reaching millions.

The square soon became an iconic venue where human rights, human dignity and the will of the people were defended, while coups, military tutelage and media corruption were condemned. Not only the people of Egypt, but also the Muslim World at large and the international community attested to Egyptians’ legitimate demands.

On 14 August 2013, the Egyptian security forces cracked down on these peaceful demonstrations. The army opened fire on civilians in Rabia Square, and other squares such as Nahda and Ramses, killing over 3,500 people, wounding more than 10,000, and arresting thousands.

The day of 14 August 2013 went down in history for witnessing one of the most brutal civilian massacres in the history of mankind. It caused deep anguish in the hearts of all conscientious human beings. All around the globe, the massacre was and still is condemned and protested by hundreds of thousands of people.

A day after the massacre, the “Rabia sign” that protesters made in Rabia al-Adawiya Square started to spread throughout the world. Within the next two days, more than a hundred million people on the Internet and social media began to use and proliferate the logo of the “R4BIA” sign. In nearly 20 countries, people raised their four fingers to make the sign as they protested against the massacre. Hundreds of websites published articles on the meaning of the sign and the philosophy behind it.

Following the civilian massacres in Egypt, this sign was also used to condemn massacres of Syrian civilians with chemical weapons. The Rabia sign was fast becoming a symbol used in the Muslim World to reflect a common spirit against injustices.

The symbol has since turned into a common sign for all who are protesting through peaceful means against every country or order in the West and the East that disregard human life and dignity, and remain silent in the face of coups d’état and massacres.

We believe there has emerged a clear need for concepts like justice, peace, conscience, freedom and human rights to be re-explored, and discussed more vigorously.

Therefore, we have resolved to establish the Rabia platform and launched the website www.r4biaplatform.com in order to represent the voice of a common conscience against coups, dictatorships, all corrupt economic, social, political relations and deep structures, and bloody scenarios of the informal economy and informal centers of political systems,

Adopt a global stance against injustices that threaten humanity,

Realize the universal unity of the righteous,

Contribute to the creation of a new world that favors justice, peace, freedom,

And ensure the transformation of the R4BIA spirit into a humanity initiative.

What will the Platform do?

This Platform will not act as the sole spokesperson of any institution, person or political party.

This Platform will only announce activities carried out by institutions or organizations and will not get involved in their coordination.

This Platform will support R4BIA events wherever they are in the world, and help spread the word on new ideas and projects that would contribute to this fresh movement.

The platform will be the voice of the oppressed all over the world.

Born in Egypt, the mother of the world, and named after one of our mothers who lived centuries ago, this sign, spirit and consciousness has now become the symbol of taking a dignified stance against oppression, injustice, unfairness and lawlessness.

All groups and organizations that hold R4BIA meetings anywhere globally will announce their activities over www.r4biaplatform.com.

R4BIA Platform is the stage of communication where the “universal conscience” meets.

This Platform, which is intended to act as a common intellect, a common venue for discussion, and an announcement board, remains open to all individuals and institutions who want to raise their voices against oppression, coups, injustice, unfairness and lawlessness.

In a short period of time, hundreds of civil society organizations from all over the world have already subscribed to the platform and declared their support.

From now on; unions, syndicates, associations, student clubs, individuals, media outlets, artists, scientists, opinion leaders, and businessmen aware of their social responsibilities will be able to interact over this platform.

With our teams of volunteers and professionals, we will strive for this communication and interaction to continue in a healthy manner.

We dream of a new world where peace, justice, respect for human rights and legitimacy predominate.

The Muslim world will have a voice in the making of this new world. R4BIA is the Muslim World proclaiming “I have a say in the creation of a new world.”

A new generation is up and coming: the “Rabia Generation.” The platform will witness

the raising of this new generation and will bring its members together.

It is not possible to describe and understand the 21st century with the institutions and concepts of the late 19th century, which were developed under the shade of wars, political and ideological conflicts.

R4bia Platform, R4bia Global Network and Rabia Generation will be trademarks of hope for establishing solidarity among the peoples for a universal solution to humanity’s crises.

We are celebrating the birth of a movement that remains faithful to legal principles, respectful to human rights, and loyal to ethical and moral values while still entertaining aesthetic concerns.

We wish for this Platform to bring blessings to the Muslim World and humanity.

Thanks for your participation.

Education of Syrian children in Turkey

In Pursuit of Islamic Civilization

One Million Qur’an to Africa

The Gains of the Islamic Unity