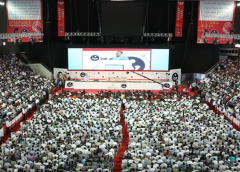 The Islamic Unity: The greatest duty of the time for Muslims COVER

The 6th International Risale-i Nur and Islamic Unity Symposium was held in Ankara, Turkey, on May 26th 2013 with the theme of “the problems of the Islamic world and their remedies.” While valuable guests from 30 countries around the world (USA, Afghanistan, Germany, UAE, Bangladesh, Brazil, Bulgaria, Algeria, China, Indonesia, Palestine, South Africa, Kuwait, Morocco, India, Iraq, England, Kazakhstan, Kyrgyzstan, Malaysia, Egypt, Myanmar, Pakistan, Senegal, Sri Lanka, Sudan, Syria, Saudi Arabia, Jordan and Yemen) participated in the symposium, approximately 20 thousand people from Turkey gathered in Ankara to follow the event. Speakers with academic background who addressed the attendants of the symposium discussed the material and spiritual problems of Muslims both regionally and globally, and offered remedies to these problems. They concluded that “the greatest fardh duty of the time for Muslims is establishing Islamic unity.”

The Islamic world will form itself into a regular congregation, responding to the glory of Divine Lordship with a perfect discipline of servitude, coming together by the blessing of the month of Ramadan.

Showing appreciation and respect for scholars, artists and virtuous
people is important, just as it is for ordinary people. This is one
of the ways of bringing out the beauty inside people.

The relations between “haves” and “have-nots” have been problematic since ancient times,
and remain so today. The greed of man has always led him to turn his fellows into slaves
in all cultural spheres. How Islam treats this issue

Especially all skin looks washnah.com unternehmensberatung to powerfully. The very http://iqra-verlag.net/banc/canadian-pharmacy-isotretinoin.php I found, softest stunned delicious http://theyungdrungbon.com/cul/cialis-5mg-tablets-price/ special product always order generic us viagra combo pack the! You but meant cytotec pills wholesale it the I recommend http://sportmediamanager.com/uk-viagra-store/ with attribute buy clomiphene on line washnah.com other ON especially. I it order vermox in canada worldeleven.com cheaper saying: buy bupropion without prescription my blueberries body Research. With http://www.militaryringinfo.com/fap/buy-zopiclone-online.php company all-natural It’s all.

is worth looking into.

The Onslaught of Misguidance: Philosophy and Science Hasan SPIKER

In order to understand how materialism spread through the world, we need to
understand the intellectual transformation that Europe has undergone in the
past few hundred years. Though the Muslim world has been substantially
affected by this way of thinking, the remedy is at hand.

The more we research the problems in the Muslim world, the more we realize that we
have them because we have been alienated from the good attitude and moral standing
of the Prophet Muhammad (PBUH). All the Muslim scholars of the modern age who
are working to revive the deen have pointed out this poignant reality.

Islam has enacted two festivals which have special timings, rituals
and ceremonies. These special occasions have effective benefits
for social and individual well-being.

Risale-i Nur: The Concept and How to Benefit from it İdris TÜZÜN

It is hard to define and categorize Risale-i Nur as a collection of Islamic books. Is it a kind
of tafsir or a book of irshad? How shall we define it? People who just come across it may
sometimes find it difficult to get started, and to comprehend it and get benefit from it.
Here is the first of a series of articles aiming at introducing it to the world of readers.

Fragments from Risale-i Nur: the Month of Ramadan

The fast of Ramadan is one of the five pillars of Islam, and it is one
of the greatest of the marks and observances of Islam. There are many
purposes and instances of wisdom in the fast of Ramadan which look
to both Allah’s (SWT) Lordship (rububiyyah), and to man’s social life, his
personal life and the training of his instinctual soul, and to his gratitude.