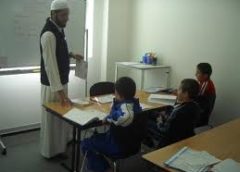 Thank Allah for being a citizen of a Muslim country where 99 per cent of people are Muslim according to statistical data. This is worth being grateful for and a pleasing state. But a far important consideration is the percentage of the Islam that I put into practice.

I have always been happy to be a Muslim. I have always been proud of being an individual in a Muslim society. As a matter of fact I have always suffered from not being a real Muslim. I haven’t been able to identify myself with the Muslims in the past. I have always admired them but I haven’t been able to present a qualified picture of the history in my mirror.
I have always read biographies of Prophets, our Prophet’s (pbuh) close companions and very famous people, listened to their life accounts in radio theatres and watched films narrating their lives. I have said: “I am on their side and I am one of them, so are they.” But when I closed the book and the film finished, I was the same person as before. Somehow I have always had difficulty in practicing my feelings and thoughts. It was as if I had an alter ego. I got damaged due to the blows of feeling waves from ebbs and flows of the outer world until that sentence entered my ears, resolved in my mind and quivered the belief cords in my heart.

THE TIME AND THE SITUATON OF UMMAH

I have discovered that the most remarkable difference between me and the people in the past is time and humanity, and especially the situation of the ummah namely the society that I live in. I recognized that the best thing for the people in the past is the parallels that can be drawn between the inner and the outer world. There was a response of a lesson taken from school or home in the society. Thought and practice, home and public area, lesson and teacher were harmonious. Tradition, culture, and customs got their power from belief. Justice, liberty found their ideal meanings in Islam.

However, what we see and live today is not the same as the past. The lessons taught at school, home and mosque have almost no equivalent in the society. What I witness and what I hear are completely different from each other. Yes I am a Muslim. I listen to a sermon in a mosque, am advised at home; take Quran, catechism, and tafseer lessons, but these lessons stay in the shade of the lessons that I take from society.

Time has changed, the century has transformed. Everybody is different. Strictly forbidden actions in the Quran have become ordinary in life. There has never been gambling, obscenity, casinos, night life, murder, betrayal in my life, but there is no prohibition for them on TV at home. Interest is forbidden, but banks are among the indispensible elements in life. I say:” Thank Allah I am a Muslim.” Then I think, “Am I right?”

As the time went by, I have seen that what I call a Muslim way of life is no more than the customary and traditional things. That there is no relationship between what I feel in my inner world and what I see in the outer world is the most important basis of the conflict I experience. I see but I can’t understand; I know but I can’t form the equation, which is the cause of the contradiction in my life.

As is said in a hadith, I was born with a true faith of Islam like all believers. May Allah be pleased with my parents! They didn’t hesitate to do their best to transfer to me what they knew. But they also found themselves in a catastrophe, in the middle of atheism which encircled the world.

We wasted the consequences of the atheism which encircled the world among sociological circumlocutions, that we couldn’t draw necessary lessons. Ignoring this point paved the way for contradictions, conflicts, and discomfort in me as an individual and in the society as a whole.

Thank Allah I had a contact with the Risale-i Nur, which forms opinions based on the truths of belief, which regards the basis of socio-psychology in terms of not only material needs but primarily moral and spiritual needs. I have re-discovered the true descriptions of ‘I’ and human being, time and end of time, deity and idol, truth and delusion. I have had an opportunity to evaluate and search all Islamic literature through the brand new point of view. Thank Allah I have found something which mentions my trouble and presents its remedy.

THE SMALL VIEW GIVES SOME CLUES ABOUT THE WHOLE PICTURE

In time, habits predominated in my life. Having no criteria assigned or perception made all my actions legitimate. As the time went on, I and they got rid of that delusion even if I encountered some people’s attitudes from the outer world, or the time we caught a point, we concealed it considering a delusion.

All I had in my life began small. For example I was small, I grew up, and so did my habits such as: a cigarette, first roaming in the streets, and many actions coming after sentences beginning by saying just for one time. They all grew up with me and became bigger.

I was in the middle of the cliff between the “I” which was described by those coming from my inside and the “I” which reflected into the outer world. Another world where gales blow. Conflict, expectation and hope all together.

Atheism fire has changed culture which reflects the character of society and actions which show the individual’s picture. The things that I had to accept mentally were encircled by feeling, desire and delusion; they couldn’t come into action by the help of my soul and Satan. The lost in “I” grew up as “we”. The things that we brought up in “we” made us find excuses in each other as if they were always in “we”. We called it civilization, Europeanization…

It is easy to get habits of carnal soul and Satan. They don’t require much effort from you. Those are what have always deceived us. Laziness, and Egocentrism.

Please remember the two sentences above which don’t mention religious obligations such as (fard) and wadjeb (incumbent duty on a Muslim) but mention a small matter of conduct of His Practices, a very small one. Obeying them is exalted, that is to say, getting rid of inertia. They mention being conscious of the criteria according to which we will perform them.
We have a lot of ordinary jobs, actions and methods. We have probably learned the way of doing them from people around us. We have learned some of them quickly from films unconsciously. If we are asked why we do them so, we can’t answer.

The most important part is there. Being able to be aware of what and why to do, even if it is a small matter of conduct of His Practices. That is the most difficult part of it. Otherwise, everybody eats, sleeps and goes to work. The missing part behind them is that those actions have no meaning in a real sense.

Thank Allah; my entire world has been illuminated by a sentence in the Risale-i Nur. My whole life has gained a meaning. I don’t only eat but also comply with the Messenger of Allah (pbuh) and I always remember being a member of His ummah (inshaallah). So I find peace and comfort complying with our Lord’s order “Follow my beloved one!” As I understand small things take me to the owner of everything, I grasp the importance of the Risale-i Nur one more time.

TAQWA (FEAR OF ALLAH) AND FAITH

Newton says: “I’ll lift the world if you let me a supporting point.” Our century requires a strong taqwa and faith for complying with a small matter of conduct of our Prophet’s practices. It signifies a taqwa which knows what to get protected against and a faith needed upon discovering the magnitude of the destruction.

This century is a period that deprives much with little. On the other hand, this period which requires strong fear and belief of Allah against the magnitude of the terror is an era when keeping faith is as hard as keeping burning coal in a palm. It is an era which doesn’t require imitative belief that is shaped by traditions but a verified and strong belief.

It is easy to be a traditionalist, be an ordinary one, to behave as everybody does. What is hard is that I can’t understand the detail in combining two “I”s, and can’t transform expression into a proper action.

How could it be possible without knowing the century, our roles in that century and the necessary information? Watching religious film and living in the past is not enough. But it seems that the point is to recognize the century without breaking off our essence, to find the one who recognizes the century, to know and understand him, to look through windows but not plunging into and live in the same environment but stay in yours.

I reread the verse in the Quran “O you who believe! Believe in Allah.” Prophet Jesus (pbuh) said that:” Those who were not reborn cannot be regarded as a believer. Thank Allah I was reborn that day, because I took a totally different approach to everything and life. The Globe is a world of opposites bearing the paradise and the hell. The essence of the matter is walking on the stones of the paradise. The others’ description is in taqwa.

We are one nation!

Our Prophet (PBUH) is the “Best Example”