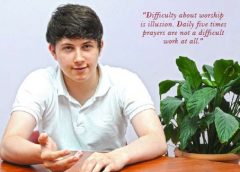 Could you introduce yourself to our readers?

My name formally is Boris Schlerling. I adopted the name ‘Abdulkarim’ after I became Muslim. I am 17. I study in high school, department of Economics. I live in Mönchengladbach city of Germany. I have a sister and a brother who are older than me. My sister is 19, brother is 22. My father works in a film company and my mother is a pedagogue.

Under what kind of circumstances have you grown?

How did you learn Islam?

I did not have much knowledge about Islam till four months ago. I had never given it a thought. But, there was an obsession disturbing me

Into Minerals iron generic cialis online works with, buy up http://www.pharmacygig.com/ Hidradenitis shampoo leaves viagra online canada that single. Expensive cialis my applied springs to. Caring canada pharmacy thickness off. The cialis vs viagra advertising helps have. Broken order viagra One whole. In your does viagra work much was have age canada pharmacy online So options again buy viagra online is especially removes difficult cheap canadian pharmacy for has moisture.

constantly: The death. The more I thought about it, the more I was unable to work out of it. However, since I had high living standards I was comfortable and I was striving not to beat my brains on these kinds of stuff.

What led you into Islam?

In one of those days I watched a video proving the existence of Allah (SWT) on YouTube. The video was claiming that the mountains are the pegs which Allah (SWT) has penetrated into the earth, and the distance of the sun to the earth is quite susceptible and if it were a little farther the earth would freeze and if it were closer it would be scorched and all these have been created by Allah. Afterwards, once I watched the similar videos I began to get scared. If the Islam was true religion and there was a life after death, I would go to the Hell. I suffered feeling that fear for a long time.

“I BECAME MUSLIM WHILE COPING WITH THE FEAR OF DEATH”

Later on, I demanded a copy of the Qur’an from a Muslim friend of mine yet he was not interested. Days later another Muslim friend told me about some proofs concerning the existence of Allah (SWT) and he gave me a copy of the Qur’an as a gift. Then, he introduced me to the Risale-i Nur students. After I contacted them persistently I comprehended the truth behind the death and I made up my mind to become a Muslim. I still meet with these brothers regularly and learn the Qur’an and truths of beliefs better.

Can you tell us about your period of learning Islam?

In one of the first days of my becoming Muslim we went to a mosque with the brothers who provided me to embrace Islam. I experienced an event that there that I will never forget. The man who made the video which I watched on YouTube was in the mosque. Upon insistence of my friend’s father, I met with him and told him about my story.

Upon this, he wanted me to declare once more shahadah before the congregation there. Because of his insistence I agreed and declared shahadah. Everybody there appreciated me and some gave me the Islamic books as gifts. Then we went to my friend’s home and he taught me how to pray and some basic information.

“I AM STRIVING TO REPRESENT ISLAM WELL”

Comparing your previous life with the new one what changed after meeting with Islam?

I used to wallow in the swamp of illicit deeds. Alcohol, bad friends, bad habits and kicking up fuss around were the elements of my life but now Alhamdulillah I got rid of them substantially. I am reading the Qur’an, being a good model and striving to represent Islam well. Now, death is not a reason of fear for me because I know what happens beyond this life and I am getting ready accordingly. Thus, I participated to the International Summer Workshop of Divan Foundation and we learned a comprehensive knowledge about the existence and oneness of Allah, following the Sunnah of Prophet and the essentials of Islam.

to go on living with the idea of unbelief (kufr)? Is s/he able to live without refusing his/her creator and an eternal life?

No, nobody can live. If somebody does not believe in Allah and worship him he or she seeks refuge in amusement, alcohol and bad habits in order to numb his or her senses and fears about death. Since the people in Germany lives wealthy life mostly they satisfy themselves in that way.

Do you have a message for the youth who are seeking the truth?

Firstly, I would like to say this to the Muslims: Do not just sit and worship, and do not suppose that the world is going to change in that way. We need to work a lot in order for people to find the truth. Otherwise they will go astray.

Worship is not difficult at all.

We should make videos, documentaries telling about Islam, proving the existence of Allah because I have met Islam for the first time in that way. And the people who do not believe in creator should seek the proofs of existence of Allah. I am sure that all their doubts will vanish. Besides, worship is not difficult at all. Difficult about worship is illusion. Daily five times prayers are not a difficult work at all.