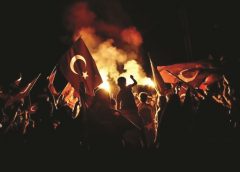 “You are governed as you deserve” says the Prophet (pbuh).  Since the night of July 15th 2016, 78 million people living in Turkey have declared all together once more that “we cannot live without freedom!” Such a millat* which is free of tyranny but loyal to Allah (swt) will of course be rewarded with an administration that is bound to the Truth. Allah (swt) has not put this nation under enthrallment and may He never put it.

The nefarious act of terror and failed coup d’état attempted on July 15th has clamped people to each other and it has fortified and reinforced the spirit of being a millat once more. People’s feelings of patriotism have awakened and people from every segment of society and ideology have taken to the squares and declared to the world once more that they are a united millat and they are going to protect their elected leaders and stake the claim for their freedom and homeland regardless of their life security.

Today, this nation has announced the words of Imam Bediuzzaman, which were stated against the cruel juntas earlier, “I can live without bread, but not without freedom!” with a deafening sound altogether once again on the face of juntas and traitors who have sold out their honour in return for nothing.

Yes, a millat which has become ‘abd (servant) to Allah (swt) can never be enslaved!

A believing society can never be surrendered!

A sacrificing and endeavouring millat will never bow to humiliation!

This cherished millat has shown it repeatedly with a determination intimidating the enemy and reassuring the friend.

This millat has shown and felt to the bones its unique relationship to its leadership once again and that the differences are not source of discrimination but integration and that the right, not false, prevails.

A small rotten potato putrefies a sack of potatoes and a small tumour destroys the whole body if a measure is not taken. It is better understood this way that disloyal, traitorous elements of a society could lead a nation and country into its destruction.

Another point which has been cleared out in this process is that we are a millat. We are one and united. We are people who are stepping forward on the same lines with same level of determination and understanding. In line with principle of “we have heard and we obey” we are individuals who are loyal to their amirs (legitimate leaders), who are striving to complete shortcomings in order to reach the goals instead of avoiding the difficulties and who are not indiscriminating but integrating.

Our contribution to these issues will carry us onto good days in every sense. Fraternity and positive act will yield good consequences. Our independence and bright future will prolong and prevail with our unity and loving each other for the sake of Allah (swt).

* Millat: Historically Turkish nation has formed based on Islam. The word millat refers to this meaning.