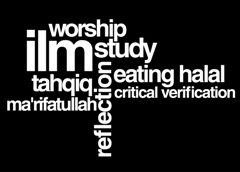 Iman (faith) is a connection between servant and Allah (swt). Iman is the spirit of the life if we consider it as a body.  Human being gains his real value if he has iman. Otherwise he is only like a physical being made of blood, flesh and bone.

In Arabic language, ایمان (iman) means “to believe” in something, whereas in Islamic terminology it means to believe in the six pillars of faith. That is, it is to accept at heart, to confess with the tongue, and eventually to demonstrate in physical actions.

As the Prophet Muhammad (peace and blessings be upon him) taught in a hadith narrated by Muslim, iman is to believe in Allah (swt) and to believe in His angels, His books, His messengers, the day of judgement and resurrection, and eventually to believe in predestination (qadha and qadar).

Let’s consider the following example:  In human body, to maintain human life there are six vital organs which are brain, spinal cord, lungs, heart, liver and kidneys  (if we accept lungs and kidneys as single).  With these six vital organs, systems in human body work together to maintain a constant internal environment called homeostasis within the body to ensure survival of the organism. If just one of these six vital organs does not work properly, or if it deteriorates, then human life cannot continue, and eventually it shuts down.

Imam Bediuzzaman Said Nursi said, “Iman is a single truth, which, composed of its six pillars, cannot be divided up. It is a universal that cannot be separated into parts. It is a whole that cannot be broken up. For each of the pillars of belief proves the other pillars with the proofs that prove itself. They are all extremely powerful proofs of each other.”  (Staff of Moses (as), the 9th Topic)

Iman-al-tahqiqi means to believe in the six pillars of faith with accurate evidences. This is not only to believe but also to be able to prove to other people. This kind of iman is acceptable and safe. If someone’s iman reaches at the level of iman-al-tahqiqi, this type of iman is not only in mind but also in lataif (لطائف) which are the subtle, spiritual faculties of human being.

Iman-al-taqlidi means, on the other hand, to believe in the six pillars of faith without tahqiq (critically verifying). In iman-al-taqlidi, as it is understood from the name, person just imitates his father or mother, Islamic culture or environment. This kind of iman is acceptable, but not completely sufficient and safe for a believer. According to most of the ulama (Islamic scholars), it is fardh (obligatory) upon all the Muslims to struggle to elevate his iman-al-taqlidi to the level of iman-al-tahqiqi.

Does the level of iman change?

While telling about the features of the believers in Surah-al-Anfal Allah (swt) said:

“The believers are only those who, when Allah is mentioned, their hearts become fearful, and when His verses are recited to them, it increases them in faith; and upon their Lord they rely.” (Anfal, 8:2)

As it is understood from the verse, iman is something that may increase and decrease. Some events and situations increase our iman, whereas some things cause to decrease.

As the Prophet (peace and blessings be upon him) said: “الایمان یزداد و ینقص’’ which means “Iman increases and decreases.” (Sunan Ibn Majah)

Because the level of iman is variable, a believer must struggle to elevate his faith to iman-al-tahqiqi which is the best level of iman.

Why iman-al-taqlidi is not sufficent?

Back in 1920s Imam Bediuzzaman Said Nursi felt and realized a danger which is the danger of disbelief. According to him, disbelief and irreligiousness rise from science and philosophy at this age in comparison to the previous times. That’s why it is more difficult to resist the materialist thoughts today. Believers who have iman-al-taqlidi are in danger of losing iman because of the materialist thoughts taught by science and philosophy which are all around nowadays.

This danger continues not only while living this worldly life but also while leaving this world at the time of death. Allah (swt) said in Surah-al-Qaf:

“And the intoxication of death will bring the truth; that is what you were trying to avoid.” (50:19).

Intoxication of death (سَكْرَةُ الْمَوْتِ) which is mentioned in the verse is partial loss of consciousness near the death. Forasmuch as today medical science demonstrated that, in human body a chemical substance called “endorphin” is excessively released into the bloodstream just before death. Endorphin is a type of morphine which is produced by body in the brain. This substance causes a partial loss of consciousness near the death. In case of intoxication of death, Shaytan (Satan) comes and struggles to steal the iman. If the iman is weak and is not at the level of iman-al-tahqiqi, most probably it will be given to Satan and it will be lost.

Nevertheless Satan is only able to reach mind, and he is only able to arouse someone’s suspicions about iman by acting over the mind. But he is not able to reach lataif (لطائف), the subtle, spiritual faculties. Because lataif is linked to the heart and Satan cannot easily harm someone’s iman if it takes root in the heart. Therefore if our iman diffuses into our lataif which is linked with the heart, we can pass more easily and more safely the last station of this worldly life. But with an iman which is established upon imitation it is very difficult to pass safely that last station. That’s why iman-al-taqlidi is not, or may not be, sufficient and safe for the salvation in hereafter.

Anas Ibn Malik (ra) who is one of the companions of the Prophet Mohammad (pbuh) said:

There are five spiritual eids for Muslim:

The only danger of losing iman is not only at the time of death but also while living in this world.  Anas bin Malik (ra) narrated that the Messenger of Allah (peace and blessings be upon him) said:

“‏ يَأْتِي عَلَى النَّاسِ زَمَانٌ الصَّابِرُ فِيهِمْ عَلَى دِينِهِ كَالْقَابِضِ عَلَى الْجَمْرِ ‏”   which means “There shall come upon the people a time in which the one who is patient upon his religion will be like the one holding onto a burning ember.” (Jami` at-Tirmidhi)

This age that we are living in is called   آخر الزمان(akhir-al-zaman which means the end of time) in a hadith of the Prophet (peace and blessings be upon him). At this time the thoughts of disbelief appear in such a manner that is not comparable with any age; because atheism is not only in thoughts but also in actions. At this time people are enforced to live an irreligious life via media and other means. That’s why all of the prophets (peace be upon all of them) warned their ummah to take refuge in Allah (swt) from the evil of this age which has the danger of losing iman.

How to protect iman from Satan?

It is simply by struggling to reach at the level of iman-al-tahqiqi. But how?

Ma’na-al-harfi (معنی الحرفي) means to observe the universe and whatever is in the universe for their One Creator. It is to examine the creatures with the intention of seeing the existence of Allah (swt). For example, we can say “What a beautifully created flower!” This is the method that is used by Qur’an and it reminds Allah (swt).

But ma’na-al-ismi (معنی الاسمي) means to look at the universe and whatever is in the universe for their individual properties. For example, saying “What a beautiful flower!” This method is used by modern sciences such as biology, medicine, botanic, and physics while teaching the properties of the creatures. Unfortunately this point of view causes human to forget Allah (swt).

In order to protect our iman and in order to gain iman-al-tahqiqi we should change our point of view while looking at the universe and the creatures that are found in the universe.

In order to understand the importance of these two points of view, it is enough to look at the summary of the knowledge of Imam Bediuzzaman Said Nursi. Because he said in Mathnawi-al-Nuriyah: “For forty years of my life and for thirty years of my study I have learned only four words… I mean by the words: Ma’na-al-harfi, ma’na-al-ismi, intention and point of view.”

Risalah-al-Nur Corpus of Imam Bediuzzaman Said Nursi at this time is the best way to acquire the point of view of ma’na-al-harfi to read and understand the book of universe which is full of signs for Divine presence; because it is the light that leaks from the ocean of truths of the Qur’an at this time. The truths that strengthen and protect iman are found in this ocean of light.

The most momentous and important truth in the universe is iman. Then the first matter about iman is to get or to lose it.  That’s why every single person must be aware of this matter that causes people to enter hell or to enter paradise. As Imam Bediuzzaman said, “Through the light of belief, man rises to the highest of the high and acquires a value worthy of Paradise. And through the darkness of unbelief, he descends to the lowest of the low and falls to a position fit for Hell.” (The 23rd Word, Risale-i Nur Collection)

One thought on “How to protect our faith?”