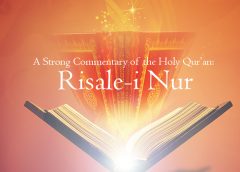 As you know Imam Said Nursi (ra)’s Risale-i Nur treatises are the basic sources of our magazine. In every issue we present you various articles that benefited from Risale-i Nur. We also publish pieces telling about his great struggle for the service of the Qur’an and iman. You can read “Imam Bediuzzaman and His Movement of Belief in the 20th Century” written by Muhlis Körpe in this issue.

Risale-i Nur is a strong commentary of the Qur’an al-Kareem. It gives us a strong faith lesson proving the truths of Islam. However, it does not explain the meanings of every verse word by word. It rather explains the verses about the truths of the faith and thus convincing those who have doubts about belief or silencing even the most obstinate disbelievers. You will read a piece about this subject prepared by Altınbaşak Academic Research Board.

Man has always wondered if there are other living beings that he cannot see in the world or in other planets and places far away from the world in the universe. He has said to himself, “There are probably other living beings although I am not able to see them with my eyes; the fact that I cannot see them does not necessarily mean there is no unseen beings.” The idea of angels and spiritual beings exists in almost every belief. But most of the beliefs fall short of explaining the attributes of these beings. Alhamdulillah, we get the answers to our questions about these unknown creatures from Islam. They are mentioned in the Qur’an and the Hadith many times. There are plenty of reasonable and narrative evidences that prove the existence of angels. And we find about the attributes and duties of these living beings in Islam. Zafer Zengin provided us with these details in his article “Luminous Workers of the Universe Angels.”

We have two articles for you about two issues which affect our social life a lot. One is about ‘interest (of banks)’ that destroys the social order, and the other is ‘backbiting’ which is a very common sin and harmful for relationships.

You will also see how important the modesty is for the Muslim leaders with the examples from our beloved Prophet (saw) and the great Caliphs (ra) in the article “Leadership and Modesty” written by Idris Tüzün.

There are also articles about education, knowledge, worship, sunnah and more in this issue. We hope you enjoy and get utmost benefit from the 21st issue of the Pen Magazine.

NOTE: The Pen is published biannually as of January 2014.