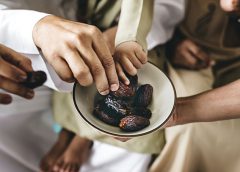 The human being, created as a miniaturized form of the universe, will be able to reach peace as far as it can understand the laws of creation and apply the principles of healthy and proper living.

It would be seen that humans are healthy and peaceful and how easily have balance so long as they live according to the lofty sunnah. When they are out of this circle of life, their becoming ill will be a preference for himself. Because the human organism was created perfectly (ahsan-i taqwim) and equipped with systems that are resistant to all negative external conditions. Despite all these supports, unhealthy and restless life can be attributed to the conclusion that it has moved away from its source of bliss and this is its fault. Because the path leading to health and peace was opened with the Lofty Sunnah of the Perfect Guide (blessings and peace be upon him).

For the diet in the Age of Bliss healthy digestive principles are also important as well as foods. It is first foremost recommended that while eating one must chew well and eat with peace and contemplation. Because the better the food is chewed, the more the brain motivates the digestive system. When the average of 15-20 is not reached by the chewing movement, digestion is disrupted from the first stage. The stomach leaves the bite that comes without good chewing to rotting without digesting. In this way, the resistance of the body is broken and a chain of diseases is opened.

It is not tolerated in Asr al-Saadah (the Age of Bliss) nutrition to mix and eat different foods together. “Our Prophet (pbuh) did not eat fish, eggs, meat and dairy products together, even an animal’s flesh with the flesh or fat of another animal. If the dishes that do not fit or are not compatible with each other and require separate enzymes for digestion are mixed with each other, they decompose without digesting.”1 Because the mixed and irregular nutrition is effective on healthy life, personality development and spiritual life; a healthy life prescription by the old physicians have been taught and summarized as in the following formula: qillat-i taam (little food), qillat-i kalam (no needless talk, concise word), qillat-i menam (little sleep).

In the Age of Bliss the most valuable bounty of nourishment is bread. Those who research healthy food and nutrition approved that the most healthy bread is the one that is with crust and bran, without refining, from not sifted flour and without additives. Such a bread has been confirmed as (real) bread. It is understood that the most natural bread has been made in the Age of Bliss. In the Hadith-i Sharif mentioned in Buhari, “Abu Hazim (ra) says: I asked Sahl: ‘Has the Messenger of Allah (pbuh) ever eaten a piece of white bread made of pure flour?’ He gave me this answer: ‘No! He saw no white bread from the day Allah had sent him as messenger until his death,’ I asked again:

”He, alayhissalatu wassalam, never saw a sifter from the day Allah had sent him as messenger until his death.’”

According to some narrations flour sieves were forbidden during Sayyidina Umar (radiallahu anhu).2 Since these health rules were not obeyed, the things that were produced as “bread” most of which are made of white flour make people fat – even if additives were not added to them. In addition, this leads to the triggering of many diseases such as hemorrhoids, ulcers, diabetes, intestinal problems, digestive system,  cardiovascular diseases. People who consume bread made of white flour are also deprived of natural cancer preservatives. 3

The diet that was applied in the Age of Bliss was practiced in the light of Tibb al-Nabawi (the Prophetic Medicine). While consuming those foods in that diet you are guided about the removal of the harms of some nutrients or to increase their benefits. For example, Abdullah ibn Jafar (radiallahu anhum) narrated “I saw the Messenger of Allah (pbuh) eating date with cucumber.” One of the wisdom of this is that date as a source of energy increases the body temperature. Cucumber is a fragrant, refreshing vegetable, making the rising temperature of the stomach decrease. That is why, especially for Ramadan fasting, date, cucumber, some curd cheese and two or three walnuts along with tea is the most ideal source of energy as a sahur breakfast.

It has also been seen that the date was banned in some cases. “Our Prophet (pbuh) prevented Ali (radiallahu anhu) who had just recovered from an illness; there is the best of the measures in preventing Ali (ra) from eating dates. When they served Ali (ra) chard and cooked barley, the Messenger of Allah (asm) told him to find (more) of it. Because the barley is the most useful nutrient for a person who is recovering from illness. In barley broth there are quality characteristics such as cooling, feeding, thinning, smoothing and strengthening the body for a person who has just recovered from illness. Barley is especially the most suitable food for people who have weakness in their stomach when cooked by boiling.” 4

In the Age of Bliss, we will describe a favourite medicinal soup recommended by our Prophet (PBUH) and tell its benefits especially for the patients:

“Narrated by Aisha (ra), Rasulullah (pbuh) said: Continue (consuming) talbina* the appearance of which is unpleasant, but is a useful food. When one of the members of the family became ill, the Messenger of Allah (pbuh) did not relieve talbina pot from fire until the patient was well or died. Pay attention to the talbina, feed it to the patient. I swear to Allah, talbina bathes your stomach just as one of you washes his face. In talbina there is comfort for the patient’s heart.” 5

The butter is melted and flour is roasted lightly. Add some cold water, melt the flour and make it a slurry.

After adding yogurt it is mixed with a blender. This continues until boiling.

After the addition of salt it is served.

In addition, the table should have green plants like parsley in accordance with Sunnat-i Saniyya.

Refreshing, nutritious and cleaning the toxins this prophetic food should be frequently on our tables.

* A soup made from barley flour, formed by adding milk and honey to the dried barley powder.