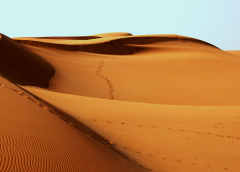 People of Najran city (southwestern Saudi Arabia started to embrace Christianity through Hannân (Hayyân) who traded with Hira (Iraq) in the 5th century.

Najran became the main center of the Eastern Church in South Arabia with taking refuge of Monophysites fleeing the persecution of Byzantine Emperor Justinian between 527-565.

In 523, the Himyarites who had accepted Judaism seized the city and exerted violent pressure and forced the Christians there to change their religion. Many Christians who did not give up their beliefs were thrown into fire-filled trenches and burned alive.

Many churches and monasteries were built in Najran during this period. The Monastery-Church that is called the House of Najran was built in memory of the Christians who were killed by being burned became a famous place of visit. It became one of the pilgrimage centers of Christianity. The heavy torture that the Najran-Christians were subjected to, which can be found in western and Islamic sources, is mentioned in the Qur’an and for those people the term ‘Believer’ is used.

“Cursed were the companions of the trench (who tortured the believers in the pits containing) the fire full of fuel.” (Buruj, 85:4-5)

The Prophet Muhammad sent a letter to Najran after the conquest of Mecca. In this letter he said the following:

From Muhammad, the Messenger of Allah, to the Usquf of Najran,

I start in the name of Allah, Who is the God of Abraham, Ishmael, Isaac, and Jacob.

Then the Usquf (bishop) summoned his three advisers without letting them communicate with each other. He asked them what they thought of this letter. All three said similar things:  You know that Allah promised to Abraham that He would send a prophet from amongst Ishmael’s descendants. If this person is the prophet promised to be sent, will you believe in him?

Upon this, Najran community, which consisted of 75 villages and 120 thousand men that can be recruited, formed a delegation. There were sixty people in this delegation. Four of them were notables and managers.

Our Prophet (peace be upon him) called out to the heads of the delegation;

-Become a Muslim, he said.

-We have been Muslims since long time, they said. Our Prophet (peace be upon him)  said:

– You’re lying! If you want, I’ll let you know what has prevented you from becoming a Muslim. – Alright, bring and notify all, they said. Our Prophet (peace be upon him) said:

-You attributing a son to Allah, worshipping the cross, eating pork and drinking alcohol have precluded you from being Muslim.

Their understanding of God, which they described as Father, Son, Holy Spirit, were spoken upon. Abu Harisa, one of the heads of the delegation asked:

– O Muhammad! What do you think about Jesus? Our Prophet (peace be upon him) replied:

-He is the servant and Messenger of Allah.

Delegation reacted against our Prophet’s calling Prophet Jesus “servant”. But our Prophet (peace be upon him) presented the attributes of servanthood of Prophet Jesus and silenced the delegation (with those arguments). Then Prophet Muhammad (peace be upon him) read the verses 62 to 64 of Surah Al-Imran which are about the subjects they are in conflict.

–          Say, “O People of the Book, come to terms common between us and you: that we worship none but Allah, and that we associate nothing with Him, and that none of us takes others as lords besides Allah.” And if they turn away, say, “Bear witness that we have submitted.”(3:64)

In the last verse read, the accuracy of what is told about Jesus is emphasized. It is said that those who turn away from this truth are mischief-maker and intriguer. Then by inviting to the belief of monotheism, it is declared that the true believers are only the muwahhid (monotheists) the ones who accept Allah as the only Lord.

Najran delegation’s insistence on the trinity and worshiping the Virgin Mary and the Prophet Jesus caused the revelation of the verses below:

–          And if anyone disputes with you about him (Prophet Jesus), after the knowledge that has come to you, say, “Come, let us call our children and your children, and our women and your women, and ourselves and yourselves, and let us invoke God’s curse on the liars.”(Al ‘Imran, 3:61)

Upon reading this verse, they asked for permission to meet among themselves. One day later, the Prophet (peace be upon him) brought his family members and knelt down (and waited for Najran delegation). Seeing this decisive stance, the Najran delegation avoided (exchanging) curses.

Abu Harise, one of the heads of the delegation said:

–          Do not try to exchange curses with him, you will be destroyed. No single Christian remain alive on earth.

In the conversation between Aqid and Sayyid, they said one another:

-If he is really a prophet, he curses us in such a way that we shall not be saved, nor shall our sons and grandchildren be saved after us.

Then they accepted Prophet Muhammed’s (peace be upon him) judgment by making him arbitrator. They agreed to give jizya and requested an agreement. According to this agreement;

-Money, crop and slaves belong to the people of Najran,

-Muslims will be given two thousand clothes and a certain amount of silver per year,

-Muslim ambassadors will be accommodated for up to a month,

-When a war or rebellion in Yemen occurs, the Najran will provide the agreed amount of support in the agreement,

-The people of Najran, their possessions, their lives, their houses, their religion, their churches, their priesthood, their diocese, all things they have are under the protection of Allah and His Messenger Muhammad (sav).

-No bishop, priest or church guard shall be removed from his position; their rights and status will not be changed,

-Taking and giving interest will be prohibited,

-No cruelty will be inflicted and no evil will be done to Najran,

-The blood feud will not be driven which is a remnant of pre-Islamic age of ignorance,

-No product tax will be levied from the Najran, neither troops will destroy their homes, nor will they be recruited for the war,

-Whoever makes a claim for a right, they will be treated in a fair and just way, neither will they persecute, nor will they be persecuted,

-Najran community are obliged not to give interest. People who charge interest in the future will stay away from protection. No one of them will be held responsible for an injustice and evil that someone else does,

-As long as they follow this agreement they will be under the patronage of Allah and the Prophet until Allah’s command comes.

The delegation said “We will give you the tax you want. But send us a trustworthy man and do not send us untrusted.” Prophet Muhammad (peace be upon him) said ‘I’m going to send you such a man that he is the most trustworthy of the trustworthy ones and he is a thoroughly reliable man.” He sent Abu Ubaidah ibn al-Jarrah (ra).

In the next period, with the settlement of the peace, many members of Najran community believed in the Prophet (peace be upon him). Among them were Abu Alqama Bishr, Sayyid and Aqid who had been among the representatives of the Najran delegation.

May Allah be pleased with the believers who stood by our Prophet (peace be upon him) Who is the pride and honour of the world.