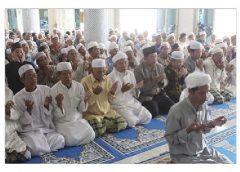 I went to Cambodia as the volunteer of Hayrat Aid during the Qurban organization in 2016. I set off on this journey wishing to personally join in aid activities and see the conditions of our Muslim brothers who live there. And I also had the intention to see the illnesses of the Islamic world diagnosed by Imam Bediuzzaman Said Nursi on the field and to see the reflections of his ideas about the cures.

Imam Bediuzzaman mentioned the illnesses of the Islamic world in Jami’ul Amawiyya (Umayyad Mosque) where a congregation comprised of ten thousand people including hundreds of scholars was present in 1911:

“In the conditions of the present time in these lands, I have learnt a lesson in the school of mankind’s social life and I have realized that what has allowed foreigners, Europeans, to fly towards the future on progress while it arrested us and kept us, in respect of material development, in the Middle Ages are six dire sicknesses. The sicknesses are these:

Firstly: The coming to life and rise of despair and hopelessness in social life.

Secondly: The death of truthfulness in social and political life.

Fourthly: Not knowing the luminous bonds that bind the believers to one another.

Sixthly: Restricting endeavour to what is personally beneficial.” 1

He explained in that speech- later compiled as a book named Damascus Sermon- that “despair” can be treated with “hope,” “lie” with “truthfulness,” “enmity” with “real love and brotherhood” and with “strengthening the blessed bonds among Muslims,” “despotism” with “real freedom,” and “thinking about personal benefit only” with “thinking about the consent of Allah (swt) and benefit of the Muslim ummah.”

In another place he mentioned the arch-enemies of Islam as follows:

“Our enemies are ignorance, poverty, and conflict. Against these three enemies we will struggle with knowledge, industry, and unity.” 2

Now let’s evaluate Cambodia in the light of these expressions.

Muslims are %5 of the total 15 million population of Cambodia. Ruled by kingdom the majority of the country is Buddhist. Muslims have been dispersed on purpose in various places in the country. However, they are not oppressed (for now) as in Myanmar. They can carry out their religious educational activities under the control of state restrictedly. We can say the Muslims in Cambodia have better condition than the Muslims in the same geography in terms of performing worship and living a religious life.

When I have observed the people from the perspective of the Damascus Sermon, I have seen that the most notable problem of the people is “despair.” When you talk to them, you can easily realize it. Along with economic problems, ignorance is unfortunately very common, too. One reason for this is the restriction of the administration on religious education. Another reason that drives Muslims to despair is being minority in the country. The majority of Muslims in Cambodia, which is among the underdeveloped countries, are struggling in poor conditions due to the lack of work opportunities.

While the situation is like this, I witnessed the aid activities of the NGOs from Turkey and some Islamic countries in Cambodia. There is a serious need for the aid institutions that support education; they should reserve bigger shares here. It has great importance that Muslim people are guided and educated in areas like trade, craft, and agriculture along with financial support in countries like Cambodia. Moreover, we must instil a powerful hope that will give spirit and life to the Muslims. And this depends on that the Islamic world makes them feel their support is with them in every issue.

Finally, I must point out this:

If the Islamic world stands by the oppressed and suffering Muslims materially and non-materially, it gives a strong message to the non-Muslims. It may even prevent many oppressions and unjust treatments. This will attract the attention of the people from other religions, too.

I finish my piece with the words of Imam Bediuzzaman Said Nursi:

“If we were to display through our actions the perfections of the morality of Islam and the truths of belief, without doubt the followers of other religions would enter Islam in whole communities; some entire regions and states, even, would take refuge in Islam.” 3

One thought on “Cambodian Muslims”