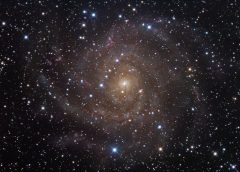 In the second point of the first chapter of his treatise on belief, Bediuzzaman recounts a dream, where Bediuzzaman sees himself on a high bridge between two lofty mountains. It is pitch dark everywhere. A deep dark abyss lies beneath. When Bediuzzaman looks around he imagines an endless graveyard on his right and a colossal storm approaching from the left. Terrified by the scene, he pulls a flashlight from his pocket in order to see well and to calm himself. Yet things are worse under the dim light. He notices monsters, dragons and lions all around and at the end of the bridge. Wherever the weak light of his flashlight touches, things appear more terrifying. Bediuzzaman, frustrated by his dysfunctional flashlight, smashes it by throwing it on the ground. The moment the flashlight is broken, the deep darkness surrounding the bridge dispels and everything becomes clear. Only then does Bediuzzaman notice that he is actually on a wide road crossing a beautiful green valley. He also discovers the true identity of the monsters that he perceived threatening and horrifying, which turn out to be quite the contrary. He wakes up reciting the Arabic phrase اَلْحَمْدُلِلَّهِ عَلَنُورْالاٍيمَنَ and Quranic verse اَللَّهُ وَلِىُّ الَّذِينَ اَمَنُوا يُخْرِجُهُمْ مِنَ الظُّلُمَاتِ اِلَى النُّورِ (Allah is the Protector of those who have faith: from the depths of darkness He will lead them forth into light – Baqara, 257).

Bediuzzaman’s interpretation of this dream is to the point and very instructive. To him the bridge symbolizes the human lifespan. The darkness at the same time represents the secrets of the universe, obscurity of the future and irrevocability of the past. The monsters are the affairs of the world. Under the wrong instrument of lighting, in this case the flashlight, all these things appear more dreadful to the person. The flashlight in the dream is the human reason. And the act of smashing it is the act of belief or the proverbial leap of faith. Only through such an act one can dispel the darkness and enlighten his world. All the things that appear gloomy or threatening reveal their true identity. They turn into friendly companions or beautiful scenery.

The moral of this dream is clear. Human reason alone is not enough to understand the secrets of the universe and the meaning of our frail presence in it. One has to believe, so that he can give a meaning to everything his mind reaches. Otherwise he only sees chaos, destruction and endless misery when he looks around through the lens of his reasoning.

A great example to this argument can be brought from the recent remarks of Stephen Hawking, the famous British physicist who is accepted as one of the great minds of the age. In the premier episode of his show “Into the Universe with Stephen Hawking,” on the Discovery Channel, he declares that if an intelligent alien life form exists in the vast space they “would perhaps become nomads, looking to conquer and colonize whatever planets they could reach.” And “if so, it makes sense for them to exploit each new planet for material to build more spaceships so they could move on. Who knows what the limits would be?” Hawking, an agnostic in his words, does not believe in the direct interference of God in the workings of the universe. He relies solely on his reason to understand the meaning of life and everything in it. And in his mind, we humans are most probably alone in the vast universe and the best companion to humanity in this universe is possibly plundering aliens. What a gloomy perspective!

Hawking’s television show is of course for an audience who think that there might be other life forms in the universe. And unlike Hawking, many people especially in the US believe that there are extraterrestrials that even visited the earth in many occasions. These people defend their belief with a simple question: do you really think that we are alone in such a vast universe? Anybody who is aware of the

vastness of the universe would hesitate to answer this question negatively. Even the most skeptical would accept the possibility of extraterrestrial life forms.

As a Muslim, I could answer this question with absolute certainty: No we are not alone in the universe. My religion tells me that there are other life forms in every corner of the universe and they all praise Allah. And I would ask these UFO believers: What makes you think that “aliens” are made up flesh and bones? Why are they supposed to be like us? Why would they need flying metal objects to travel long distances? In short, why are you putting limits to your imagination of life?

Islam does not restrict life to the material world around us. There are different levels and phases of life and existence, most of which human reason cannot comprehend. Some of the inhabitants of these different realities are made of fire, like the jinn. They have a nafs (ego) like we do and they are subjected to a test in this world, like humans are. Some others are made of light and have no nafs. They are called angels and serve a major purpose: praising Allah. Angels are also the inhabitants of far off galaxies, where they observe the art of creation and praise the power of Allah. Muslims never believed that humans are alone in this universe. Yet their understanding of the universe, thanks to our holy book, is far more sophisticated and multi-layered. There are multiple levels of life, different circles of existence and everywhere our mind reaches and beyond is filled with life. And to all, our Prophet Muhammed Mustafa was sent as Allah’s mercy.

A Muslim’s concept of an angel is never of a partner or a meddler in the acts of Allah. Angels, as we believe, are the spectators of each and every work of Allah. They are the witnesses of the things of which we humans are not even aware. They are created by Allah to witness these events and praise the work of Allah. And in the far galaxies that we can only reach through our minds, angels are assigned to observe the art of creation in every moment. Angels make us believe that we are not alone in this universe. There are other creatures that accompany us. And we humans are the most honorable of them. (esref- mahlukat)

I want to end my article by going back to the flashlight metaphor. It is hard for anyone to claim superiority over Hawking’s mind. He is far more knowledgeable and clever than this author and the readers of this article. Yet, such a brilliant mind does not bring peace to its owner when not accompanied with belief. A believer might not be as clever as Hawking. But at least he is aware of the limits of his reasoning and able to make the leap of faith which would enlighten the huge rock we live on and the worlds surrounding it. In other words, a believer does not put his complete trust on what his flashlight shows him.

3 thoughts on “Are we alone in this universe?”

Luminous Workers of the Universe: Angels