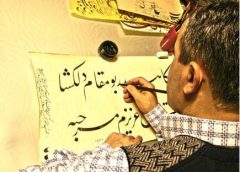 “Ignorance,” the greatest enemy of man; there is no doubt. But we need to consider this question at length and find a reasonable answer to it:

“Ignorance of whom and what, not knowing what is the greatest enemy, the most dreadful calamity, the most terrible scourge?

Time is quantity time: there are heaps of distractions on the market to confuse the mind and heart and to destroy intellectual. Man, coming face to face with thousands of pretended knowledge and news by going from one thing to another, is unfortunately unaware that he/she is seized by an unveiled insanity while thinking of running away from ignorance.

Man’s heart having infinite desires and immeasurable needs as well as unlimited enemies and measureless sorrow is not satisfied with the transient information as he/she is not satisfied with the transient lovers. Self-unaware people are unaware of such hungers! As he/she is unaware of his/her hunger, he/she is also not aware of the ‘wisdom‘ meal! Whereas “wisdom” -real knowledge- real information is the key hidden in your essence, placed in your heart,inserted in your ore…

If man knew himself, he would know and find the Creator and the Maintainer of himself and thousands of man like him and all the creatures in the universe. He will revive as he knows Allah’s names and attributes, doors of knowledge will open to him one by one and mouth of the ignorance well will be closed

for him. He will experience a unique peace of finding the formula of the universe and tranquillity of meeting with the Samad mirror (name of human heart purified by the mentioning Allah, reflects the Samad name of Allah as it is pure).

As man knows “Him,” he will paint himself with the colour his Lord wishes. He will take on the outfit his Lord demands. He will reach to the ‘maximum output’ point as a result of being and behaving in accordance with his creation. All the signs of ‘ahsani taqwim‘ (the best form) will be seen in and on him. As he knows “Him” (his Lord), he will know himself and the more he knows his Lord, the more he will know himself. Once he finds his Lord, he will find all his wishes and needs and will be saved from all his fears and endless and unnecessary gratitude.

He will realise saying only “I believe in Him! I know the existence of God, Allah!” and getting contented with only and only saying this is such a great misery. And he will also realise how a great maturity knowing Allah and meeting Marifatullah is.

He will be able to learn the secret of the saying Muhyiddin-i Arabi said to Fakhr al-Din al-Razi in his letter: “Knowing Allah (SWT) is knowing the more of His existence.”

And only then he will get to know why one-third of the Holy Qur’an is on “Tawhid.”
And again, only then, he will understand that the only way for the societies to be free of the slavery of ignorance is to bring up a generation who knows their Lord.