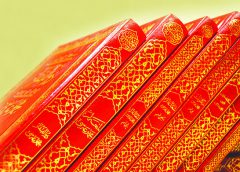 We live in the terrifying tribulations of the end times and the sins that attract the souls. Thousands of sins are hitting to every human from everywhere. We are faced with losing the treasure of eternal life. People of misguidance want to take away our faith, which is the key to eternal life, by attacking us collectively and by all their forces. It seems really difficult for a Muslim to withstand against these endless enemies and protect his faith by himself. Everyone who lives at this time, especially young people, is exposed to sins and situations that endanger their eternal life. These are;

-The desire to enjoy the world’s life with its pleasures

-Its being very easy to commit all kinds of sins

-Funs which waste your time by dragging the masses after them

-An imaginary and a wide world opened with telephone and internet

-Inciting a sense of egocentrism excessively

-The corrupt philosophy that guides science

-Our creator, Allah’s not being talked about at schools

-Traitors’ (who are within Muslims) actions which sow discord among Muslims

All believers who live in this Muslim country are exposed to all these sins. It seems almost impossible for a single Muslim to defeat these enemies and protect his faith with his own efforts. In this case, the Risale-i Nur, which has established a luminous and eternal friendship and brotherhood, has drawn a road map and made a significant breakthrough despite all these things, is contributing to the rescue of faith of people. It shows and proves [the existence of] an eternal and great community with millions of Islamic heroes against the terrifying enemies attacking collectively. It is announcing with strong evidence that there is permanent suffering in this mortal world’s deceptive, temporary and illegitimate pleasures.  Where science is in denial, it proves the existence and oneness of God in a very clear and brilliant way.

Everyone who benefit from these luminous works and protect their faith, live the beautiful morality and Islam that they describe with their brothers and sisters, lead a happy life in the excitement of finding the treasure. He lives triumphantly and in dignity at this time against the people of disbelief and misguidance who attack Islam collectively. Yes, faith is the key to the treasure of eternal bliss. The man who cannot save his faith, in this world he is unfortunate and in eternal life he will be disappointed.

Such a man will suffer the loss of his youth and all his loved ones over time. Permanent sins and sadness of temporary dissipation and entertainments will corrupt and spoil his heart. Curious political events disturb the peace of mind and soundness of thought. However, in the absence of trust (tawakkul), the difficulty of making a living completely damages the soul. He has no strength left to worship.

When we are at the point of admitting defeat under such circumstances, the fact that the Risale-i Nur has come up challenged and coped with them all is Allah’s greatest blessing and gift at this time. If all the possibilities and beauties of the world were given to us, it would be very cheap in the presence of this treasure. A believer who reads and benefits from the truth of a matter of faith with his brothers will have the following:

-He leaves all these sins and worldly things.

-He watches the layers of the universe.

-He discovers the Names of Allah that are His secret treasures

-He falls in love with the beauties of the works he witnesses and of Asmaul Husna that manifest in them.

-He contemplates and watches them with amazement

-He gives thanks and shows reverence to Allah’s endless offering and favours.

-In the enthusiasm and excitement of finding the treasure of eternal life, he can spend his life happily.