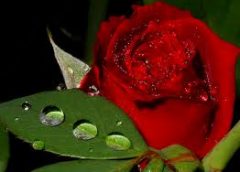 Allah created humans as the best and grown-up fruit of the tree of the universe. Allah placed the talent of love, which can surround the whole universe, to the heart of the human, the core of that fruit. The human keeps love for all beings. He loves his planet as much as his home and loves the eternal paradise as much as his garden. Indeed, the beings he loves are not permanent but are leaving. Newcomers are going away and the leavers are not coming back. He always suffers from this separateness. That limitless love of him throughout the universe reverts to limitless spiritual suffering. The fault of this suffering belongs to himself, because the limitless talent of love was given to the human to love the One who has the eternal beauty. Humans misuse this love for temporary beings and is being punished by suffering due to the separation.

There are three reasons to love something: Beauty, Perfection and Bestowal.

The entire universe is like a mirror. Just as a mirror reflects the image and picture of the things in front of it, reveals information about it and makes it known, in the same way, each creation is a mirror. All of the beauties in the creation mirror which we love, and all the perfections which we admire and the bestowals which make us their servants are just minute and weak shadows of the shadows of Allah’s infinite beauty, perfection and bestowals.

Seeing a mirror reflecting the light coming out from the sun, we know that the light directly comes from the sun. The mirror is not the source but reflector. Accepting the mirror as the source of this light, which indeed comes from the sun, is such a wrong and ill-conceived idea that it is the same as accepting all creations which are indeed mirrors, as sources of beauties, perfections and bestowals and addressing all our admiration to them is a thousand times wrong and ill-conceived than the former example as in the mirror.

No being deserves the real love except for Allah. Since all beauties, perfections and bestowals are just the attributions and manifestations of the holy names of Him such as Merciful, Compassionate and Jamil, Dignified and Bestower. Heavens with all their beauties are just the sparkles of his Mercy. All livelihoods of all creatures are the manifestations of his name Razzaq.

The person who easily ignores the worldly things which are transitory and the one who focuses not on mirrors but what the mirrors show, will comprehend the reality that it is no-one but He who deserves real love and deserves the eternal love of Allah.

According to the science of logic, two meanings and conclusions – one positive and one negative – can be infered from the following sentence. Positive conclusion: “If the sun is up in the sky, it means now it’s daytime.” It’s concluded that it is now daytime.” Negative conclusion: “If it’s not the daytime, it is easy to conclude that the sun hasn’t risen up in the heaven.” According to the science of logic, these two conclusions, negative and positive, are definite.

In the same way, the above verse says: “If you love Allah, you follow His Prophet. If you do not follow him, it shows that you do not love Allah SWT. If a person loves Allah, it entails following the way of Allah’s Beloved Messenger. Yes, the one who believes in Almighty Allah will certainly obey Him. And the most acceptable, direct, and the shortest way amongst many others is to obey Him, without doubt, the way Prophet Muhammad led and followed. Since you love Allah, you will act in the manner He loves. To do that, you must resemble the person which Allah loves. And he who the person is loved by Allah may only be resembled by following his way. Once you follow him, Allah will love you, too. You already love Allah, so He shall also love you.”

These phrases form only a brief and concise meaning of the verse. It means that the most exalted goal for man is to receive the love of Almighty Allah. The verse shows that the way of achieving this elevated aim is by following Allah’s Beloved Prophet and his way of practicing Islam, that is Sunnah.

Therefore, to gain the love of Allah, one should follow the Sunnah. Love of Allah can only be gained by doing the things which result Divine pleasure. His pleasure can be seen perfectly in the actions of Prophet Muhammad (PBUH).

Human beings wish to look like the people they love as a result of their nature.

Prophet Muhammad is the only person who has the highest level of etiquette, honour and excellence among all human beings approved by not only by his friends but also his enemies; his great life, his thousands of miracles, the very pleasant outcomes of his religion, the holy book and the verses he has brought, 124,000 trustworthy prophets who informed the humanity about his prophethood, 124 millions of saints who got together under his message.

He, the foremost person to be taken as a model, guide and leader in our behaviours, actions and words is Prophet Muhammad (PBUH).

The hadith of Prophet Muhammad (SAW) emphasizes the importance of following the sunnah: “Whoever will adhere to my sunnah when the time of ummah’s being corrupted, shall receive the reward of hundred martyrs.” (Imam Beyhaki)

Especially in this age of dread, horror and subversion where people’s minds are confused, hearts are stranger to spirituality, preserving the faith in the heart is as difficult as keeping the fire in your hand. Fitna is as charming and attractive as magnets and it imprisons souls. The world is preferred to hereafter, every kind of moral values and virtues are almost dead both in social and political life. Truth and deceit are sold on the same shelf. People’s aims and efforts are just for their own benefits. Faith as well as basis and roots of the Qur’an are being attacked by bad-tempered philosophy. The Sunnah is consciously being attacked and tried to be destroyed while ummah is divided into sections. The unity and solidarity of ummah are completely torn apart. The hadith of Our Prophet (PBUH) summarizes the importance of sunnah like which of aforementioned problems reflected: “Whoever will adhere to my sunnah when the time of ummah ‘s being corrupted, shall receive the reward of hundred martyrs.” (Beyhakî)

May Allah give us success and perseverence in obeying the Sunnah of His Prophet (SAW) and take part of his great intercession (shafa’ah) in the hereafter. Amin!