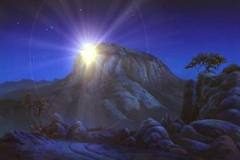 Today, one in five of humanity and half of the earth call him “their Prophet!” and love him and obey him. The magnificence of the noor (light) of Muhammad (PBUH) has never diminished for fourteen hundred years. Although some deficiencies of the members of Muslim world have risen recently and the beauties of Islam are not being successfully reflected into every walk of life, the noor (light) of Muhammad has his power to function all the time and it is still the real source of hope to humanity. It is high time that the world learnt it deeply and searched it really. Endless thanks be to Allah that today humanity is on the eve of discovery of “Master of the Realms”…And Muslims are filled with excitement of rediscovery and refreshment of obedience to the compassionate Prophet who is “the best example” and people are to be “a good ummah” again.

When the caricature crisis broke out in Denmark, many Muslims around the world reacted fiercely to that irritating event which slandered the Prophet (PBUH) unfairly. The pure and ultimate inheritance of our Prophet to us, his ideal way of life, which is Islam itself, has been under harsh attacks and we could not have waited closing our arms and watching in silence. The reactions, however, went beyond the purpose and unfortunately some undesired incidents took place. They should have expressed their aggrieved feelings in a milder way which would both convince the Europeans and would not put all the Muslims in an unfair position.

Quite a number of convincing responses were given peacefully following those provoking caricatures, however some still go on drawing these kinds of caricatures and attacks in other ways in the name of freedom of speech. We, at The Pen magazine, are covering in the sixth issue, the Most Famous Person on Earth, Prophet Muhammad (Peace and Blessings Be Upon Him). The hostile propaganda of caricature, which is perpetrated by traditional so-called rivals of Islam and the Prophet, has a considerable role on preventing the message of Islam to be understood by common non-Muslim people. Therefore, we aim at presenting the different aspects of morale of Prophet Muhammad in this very issue so that fair-minded non-Muslims will have the chance to get true information about Prophet Muhammad from an authentic source, apart from orientalists’misguiding myths.

We believe that there are millions of intelligent non-Muslims, who are eager to learn more about Prophet Muhammad, among the audience who will not be satisfied by that previously mentioned dark, narrow-minded, shallow and one-sided blaming propaganda. We hear these kinds of people think that they are being ridiculed by this narrow-minded flow of news and so they are conducting their own research about Islam. We intend to provide necessary information for those whom we implore guidance and the best for them from Allah.

Of course Muslims will also benefit from the articles in this issue as well as non-Muslims. To learn and live by and represent the life and morale of Prophet (PBUH) is a universal duty of every Muslim. When the blessed personality of the Prophet is abused, just shouting and kicking people around or burning flags will not handle over the problem, will they? We do need to know what Prophet Muhammad did in similar events like in the example of a young boy kidding with the adhan (call to prayer) whilst it was being recited. He neither beat him nor scolded, but told him kindly. The easiest way is to read the story.

Speaking of the content of this issue, Idris Ferid firstly defines the meaning of sunnah and then determines the place where sunnah should take place in our lives. You will read the miracles about the bounties of Allah (SWT) to His Prophet, which are seals of prophethood, in another article titled “Blend of Miracles” compiled by M. Said Yuksel extracted from Risale-i Nur’s Nineteenth Letter. Murat Inceimamoglu gives examples from the Prophet’s high morale which was defined by Aisha (RA) as the Qur’an. Lastly, Hasan Karatas points to the signs and cues in Biblical texts which refer to the Prophet Muhammad (PBUH). And you will read many more articles which we believe will broaden your knowledge about the Prophet and strengthen your love towards him.

Clearly, The Pen Magazine walks its way improving issue by issue. Yet, we are aware of some mistakes and shortages, and the distance which we need to head. Indeed there is no end for improvement. However, we believe we will produce more satisfying issues with your support and comments.

May Allah (SWT) guide us in the path of His Prophet (PBUH) forever.