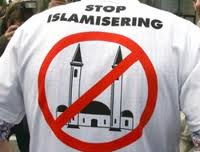 Malicious focuses, which have seen the tremendous rise of the Islamic world in recent years, have underhandedly strategized a current intrigue behind closed doors: Islamophobia!
They are plotting every plan in order to make Islam a frightening religion, which in truth takes away all the fears of the humanity.
Fear has never been abused to such a dreadful extent.
In this issue of The Pen, we wanted to focus on this danger and abuse and deliver to you an important official statement and final declaration from the conference held by The Union of the Nongovernmental Organizations of The Islamic World (UNIW).
Islamophobia is an obvious threat for the world peace and rather than a simple idea, it is a clear discrimination and a crime against humanity.
Islamophobia, like anti-Semitism, must be held as a crime and laws must be regulated against this dangerous discrimination, which is promoted by terror and racism.
An effort to equate terror with Islam is certainly a malicious discourse and is a product of a wicked propaganda aiming to raise Islamophobia.
Usage of expressions such as “Islamic terror” and “Islamofascism” is a part of the global strike plan devised to spread hostility towards Islam.
We need to collectively combat with Islamophobia, promoted by ignorance, malicious policies and provocative media operations, and with the hostility to Islam.
However, particularly our religious leaders, clergymen, scholars, civil society representatives, academicians and politicians possess a crucial mission in this collective struggle.
Islam and fear are two words that can not go hand in hand.
However, due to the ongoing campaigns, Islamophobia ended up a sociological phenomenon and a malevolent tool and product of the hostility to Islam, which is exploited as a political arm.
Muslims are, as a result of these Islamophobic policies, publications ad events, subjected to much discrimination, violence and abuse all around the world including the Islamic countries.
Islamophobia is the most recent yet the most dangerous malice the world faces.
Islamophobia is an obvious and dreadful infringement of human rights.
Islamophobic publications and policies and discourses mentioning Islam along with terrorism support the scenarios of catastrophe composed against the world peace.
We have made a change and spared part of our magazine for articles in Russian. I hope this part, which is a preliminary for a Russian magazine we plan to issue in the following months with our team, is going to stimulate new horizons.
I now invite you to a journey among the pages of The Pen where you will find important and inspiring works. Welcome! May it be most beneficial for you!

Why do we read Qur’an in Arabic although we cannot understand it?

Islamophobia: Challenges and the Way Out