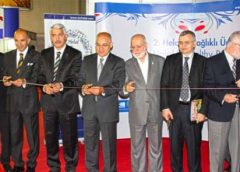 The 4th International Halal Food Conference showed how Muslim scholars are expert on Halal issue. However, Muslim NGOs must increase public awareness; and pious entrepreneur must enter into Halal business.

Binding together with sticky gelatine

No one can dispute or detract from the importance of Halal as speaker after speaker at conferences over the years have testified to this. No one can deny the sheer size and value of the global Halal trade. And in the main, apart from regional differences and interpretation, Halal certifiers are in agreement about their role. But the smoothest ingredient that binds things together, paradoxically, is the one that presents the roughest ride and creates more challenges than any other. The product is Gelatine; an all pervasive multi-functional ingredient used most extensively in the food and non-food industries has been the subject of innumerable debates with divergent views on its acceptability for decades. We need to get a firm grip on the slippery slope of demystifying the stickiness surrounding Gelatine. Also entire types of gelatine, the manufacturing processes, the forms and shapes that it is found in, the labelling jargon that it hides under, the religious views of some of the leading scholars worldwide and the position adopted by major certifiers need to be clarified.

Dangers in plastic and can packing

It is now a proven fact that “Bisfenol A” is very harmful to human health. This is a product that is widely used in plastic bottles and tin cans. Bisfenol A that

may be present in PET bottles, soda cans, and baby bottles may increase risk of coronary diseases. It may also cause diabetes and an increase of liver enzymes.

Some producers have stopped using Bisfenol A, but consumers still have to be aware of these hazards that await them.

Effects of vegetable oils and margarines on human health

GMO foods according to Islamic Fiqh

Developments in Genetic science have led to mass production of GMO foods. These foods are now getting very common because of their relatively high quality, longer life and better ingredients. However, whether the genes are taken from halal sources or not has not been discussed. Those involved in the science of Fiqh should start working on this very important subject.

“Halal and Tayyib” and an application example in certification: GIMDES

‘Halalan tayyiba’ is a principle sourced from Surat Al-Baqara in the Qur’an (2:168). This verse recommends the Muslim consumer to select good food and use the criterion of whether it is halal or not for the selection.

GIMDES Halal Products Research Institute works according to this principle only. Thus, it has proven that this Qur’anic principle is actually workable in today’s business world.

GIMDES studies have concluded that the principle ‘halalan tayyiba’ is applicable in food production.

Allah says in Surat Al-Baqara verse 29, “It is He Who created for you all of that which is on the earth. Then He directed Himself to the heaven, [His being above all creation], and made them seven heavens, and He is All-Knowing of all things.”

The part “It is He Who created for you all of that which is on the earth …” is understood by Ulama as ‘cleanliness and halalness is the main issue.’ This means that if something is not proven as Najis or Haram, it is accepted as clean. So, certification must focus on finding haram, but not proving halal.

The ability of transgenic plants and animals, also called genetically modified organisms, to produce food for humans, and desired bio molecules that have therapeutic potential, in large quantities has revolutionised the global practices in the food and pharmaceutical industries. The technology used to produce transgenic plants and animals is called genetic engineering. Halal Food refers to food and drink and/or their ingredients permitted under the Sharia Law. Food and drink containing products and/or by-products of genetically modified organisms or ingredients made by the use of genetic material of animals that are non-halal by Sharia Law are not halal (MS 1500:2009). Food and drink processed through pig DNA biotechnology is contradictory to Islamic Law and it is forbidden. Therefore, these genetic engineering approaches must be explained in detail by scientists to the Sharia scholars so that they may make decisions on whether such approaches could produce halal transgenic food.

The conversion of vegetable oils into solid fats is achieved during a process called hydrogenation. That change in physical state is made possible because some saturated fats (containing only simple bonds) become unsaturated and other unsaturated fats are transformed from their dis-configuration into their trans-configuration.

From the perspective of the food industry, trans-fats are attractive because of their long shelf life, their stability during deep-frying, and their semi-solidity, which can be customized to enhance the palatability of baked goods and sweets.

Although many scientific studies have suggested that the negative influences of trans-fat consumption go beyond cardiovascular risk, causing diabetes, cancer, Alzheimer’s disease, obesity, or liver disease, there are, however, fewer instances of consensus in the scientific community asserting that eating trans-fats specifically increases the risk of other chronic diseases.

Oils are important in nutrition, although it is commonly believed that you have to stay away from oils. Oils have some very essential vitamins and fatty acids that are useful for the human body. Various oils contain four basic fatty acids in different quantities. Non-refined olive oil is much better than refined olive oil. It is both protective and reforming for the body. Margarines are very common and it is now proven that margarines can trigger coronary disease and cancers. When we look at margarines from the medical view, production methods and ingredients have to be considered. Sunflower oils have different quantities of fatty acids depending on their types. Palm oils and their varieties have good effects on human serum lipids and thus they are protective against coronary diseases. We should also look at butter and fish oils and make comparisons.

‘Halal Certification’ is defined and its process is explained in the light of Sharia. Halal supervision and the certification process involve six major domains. They are “Halal Producers (Industry); Science and Technology; Islamic Sharia and Fatawa; Regulatory Agencies; Muslim Consumers; and Halal Certifying Bodies.” Problems of Halal Certification in non-Muslim countries have been identified in each of these six domains by surveying the experience of Halal Certifying Bodies across the world. These bodies should utilize from the recommendations addressing these problems from the inputs received from the participants (Ijmah) of the survey.

Problems in Halal Food in Europe and possible solutions

Jewish people living in Europe have an established system of Kosher and their problems in consuming food products are relatively smaller than Muslims.

Muslims have been trying to set up their own criteria and systems by importing from safe countries or checking halalness of products by local means.

One of the major problems is that some issues are understood differently by different Islamic communities. Every Muslim knows that pork, alcohol, blood and some kinds of meat products are strictly haram. However, because of different views on transformation (Istihalah), it is now very difficult to assess whether something is halal or not. What about gelatine? What can you say about glycerine? Some Muslims distribute manuals and guides on food products and composite materials like E-coded products? But how safe are we?

There is an absolute connection between halal consumption and Ubudiyyah (obedience to Allah). Allah’s being Al-Malik Al-Haqiqi, human’s beings the Caliphs on earth, the concept of Amanah, and Wahy are well-known concepts. Imperatives of Islam to take care of the body must be related to eating halalan tayyiba and also drinking halalan tayyiba. And we as Muslims know that all acts of us are recorded by Kiraman Katibin and subject to the account (Hisab) on the Day of Judgment. All halal consumption being the mandate of Allah in Qur’an, Sunnah as understood by Fuqaha in their drawing up Ahkam (rulings), observing these rules constitutes Ibadah (worship) and Ubudiyyah (servitude to Allah), as rewardable and punishable acts of a Muslim. This makes consumption in Islamic Jurisprudence different than any other secular clean and healthy consumption, since the Islamic notions of Taharah and Halal are much more spiritually charged than just secular, scientific and medical cleanliness. There should be no squandering (Israaf), no destruction of anything or using things in vain.