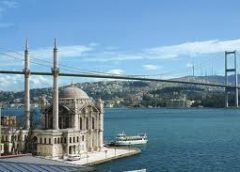 People say if you get only one second to see the world, see Istanbul. So, June last year (2009) I went for a trip to Turkey with a group consisting of 35 people organized by Wadah Pencerdasan Umat Malaysia in cooperation of Hayrat Foundation. The moment I got off the plane, (come) out of the airport, I immediately fell in love with the city, and the beautiful scenery of Istanbul. It’s blue everywhere -the sky is blue, blue mosque, and blue street. Everything is so beautiful. You can see flowers everywhere. The city’s abundance of important historic buildings and exciting new art galleries and museums provides visitors with more than enough to see.

Istanbul is a mixture of history and modern life. It’s like a melting pot, different people, different races and cultures.   People in Turkey are friendly, open-minded and humorous. I like Turkish people very much. They will smile at you when you look at them.  They will try to talk to you, no matter whether they can speak English or not. And they will be very eager to teach you Turkish if you ask them to do so. They will invite you to their home and prepare a cup of Turkish tea for you.

Our trip to Turkey was considered as 3 in 1.  A 10-day tour of various historical sites which includes among others, the tomb of Sultan Muhammad Al-Fatih, the Blue Mosque, Al-Fatih Mosque, Eyub Sultan Mosque, Miniaturk, Panorama Museum, Bosphorus Strait in Istanbul, Afyon (poppi platation),  the Quranic printing factory in Isparta and the tomb of Jalaluddin Ar-Rumi in Konya.

We were very touched when visiting a Quranic printing factory because it is owned by Hayrat Foundation, the followers of Ustaz Bediuzaman Said Nursi.  He was a great philosopher.   From a Sufi family, Turkish theologian Ustaz Said Nursi (1876-1960) attempted to integrate Islamic and modern scientific thought. Known particularly for his biting opposition to the social consequences of atheist ideology, he sacrificed all his life fighting against atheism. Inevitably at odds with  rigidly secularist regime, Nursi spent many years in internal exile and prison.

Our group also had an opportunity to attend an International Symposium on Badiuzzaman Said Nursi that was held in Istanbul, Turkey from 6 – 7 June 2009 organized by The Hayrat Foundation (a prominent NGO based in Turkey). Papers Presented from many countries including Malaysia was a clear signal that Ustaz Said Nursi collections are distributed world wide.  I noticed in his works that he does not only talk and discuss about “Tauhid” but he stresses on the importance of solidarity in social life. He helps the poor, the desperate, the needy and the orphans. He does not allow clashes, hatred, enmity or blood.  Today, however, his works are freely available in Turkey.

From my reading and staying 10 days in Turkey as a guest of Hayrat Foundation, I found that Ustaz Said Nursi and his collection attribute a special importance to the stability and integrity of social life. He works for the maintenance of social peace and simplicity in the entire world. He does not rely on disruptive, divisive or destructive alternatives; he views optimism and positive action as a duty and a principle that should not be abandoned. He does not tolerate negative action. He reinforces tolerance, love and solidarity in society. He rejects tribalism, ethnical extremism, racism and negative nationalism. In Malaysia, books about Ustaz Said Nursi are difficult to find in bookshops.

In today’s world, it is a fact that the tendency toward religious precepts is stronger than ever. International research confirms this fact. It is already accepted that religion is a powerful asset that affects the man of the 21st century.  Ustaz Said Nursi and the Risala-i Nur Collection made its call with wisdom and gave its message with efficiency. He remained loyal to his cause without retreat and with patience and optimism. He put a special emphasis on the importance of the human being; he never wavered in his position of optimism about the future.

To all Brothers and sisters in Hayrat Foundation, I just wanted to write to let you know that we had the absolute best time in Turkey! It was such a wonderful experience, you made this trip look so easy. From the minute you met us at the airport I knew that we were in good hands. Thank you so much for your friendliness and hospitality. Never in my life have I ever encountered such an enthusiastic person.

Thank you for all of your help while we were in Turkey.

One thought on ““You will never Love something if You do not Know it.””

Being A Muslim In Europe

Necessity and Evidences of the Revealed Books: Some Reflections

Theory of Evolution and Modern Science