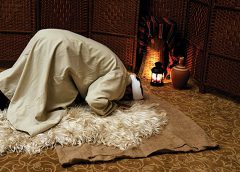 Salah (prayer) has a special place among all of the forms of worship for a Muslim, for it is the most important worship which will save the hereafter of a person. The fact that Salah is performed five times a day and at special predetermined times shows its importance. For the most part, a person cannot perform any religious activity while he is busy with his daily activities. Moreover, he will inevitably fall into heedlessness if he does not come across something to remind him of the hereafter. Especially with respect to the currents of sins of the End Times, it is much easier for a person to fall into heedlessness.

Realize that the moment a person begins to forget his spirituality the time for the Noon Prayer comes in – thus shaking him spiritually and making him recover himself. After the prayer is finished, he then loses himself in worldly matters again. Now the time for the Afternoon Prayer comes in. It shakes him again and takes him out of a state of heedlessness. All the Prayers during a day help him turn his face towards the hereafter. They prevent him from continually committing sins. In fact, there is good news that the small sins committed between two Prayers will be forgiven and this gives hope, motivates to abstain from sins.

Apart from that, the Prayer keeps a person away from sins and protect him from heedlessness It consists of every type of worship and has a characteristic which points out all kinds of worship of all creatures. As the most honourable of the creation, a human presents Allah (swt) with the worship of all creatures by means of the Prayer which consist all of the creatures’ worship.

The Prayer, which becomes a means for us to present the worship of all creatures to Allah, is the worship which makes us close to Allah (swt) the most. And in the Prayer, the moment we are most close to Allah is when we prostrate (sajdah). The hadith “The nearest a servant comes to his Lord is when he is prostrating himself” (Sahih Muslim 482) indicates this truth.

This closeness points at a relation between prostration and soil. When we examine the features of soil, its relation with our spiritual life and the truths it represents, the issue is understood much better.

Creatures which die or sleep in the winter and then revive in spring with the permission of Allah attract our attention to the soil. Wrapped around by shroud of snow in the winter and buried in soil, the creatures revive with the melting of snow in the spring. This general revival is a proof of resurrection after death. Soil is probably the first cause among many causes, which are created by the Causer of the causes, Allah (swt), regarding this revival of the creatures in spring. Plants are nourished from the soil with the permission of Allah. Animals live on the soil and are fed with the things which are raised on earth. Humans also are in the same circumstance. This being the case, the soil becomes the heart of the world.

What makes the world different and liveable is the soil on the surface of the earth. Although the layer of soil is quite thin compared to the size of the earth, it is the most important part in terms of its function.

Soil represents humility. “In modesty and humility, be like the earth” is the advice of Mawlana Jalaluddin al-Rumi, which is an important principle for us. Soil is in the modest condition of being under our feet although it is the heart of life and humans are created from it. With respect to this modest condition, the earth is closer to Allah (swt) than the highest heavens.

The path to Allah is through the soil

Soil is the thing from which all the creatures are nourished. It is that on which people live and the manifestations of the Divine Names Hayy (The Living) and Qayyum (The Self Subsisting) are seen. Just as mercy comes through water, life and bringing to life occur through soil. Colourful flowers blooming in soil make the seven colours in the white light of the sun appear. You cannot see these seven colours on air and water. You can see the light of the sun on air and the image of the sun on water.

These features of the soil shows us why we are nearest to Allah when we put our forehead to the ground while prostrating in the Prayers. By putting our forehead to the ground we can get rid of our unnecessary and unfounded arrogance in the presence of Allah (swt). This is because the prostration means surrendering to Allah. It is to confess that all the things which we think as belonging to us are not ours and their real owner is Allah (swt).

Through prostrating we take refuge in Allah (swt) body and soul with everything that is entrusted to us by Allah. During prostration we leave everything behind and are alone with Allah. Prostration, with its feature of making us nearest to Allah in the Prayer which is an example of the Miraj, is one of the most important symbols of Islam. And since Muslims prostrate only to Allah, its place in our spiritual world and its influence on us is unique.

As humans, who are living beings created from soil, we become near to Allah by putting our forehead to the soil. We continue our life by nourishing from the soil. We quench our thirst with the water that come from the soil.

When the time comes, we return to the soil and wait for the Doomsday. That is why we should not be afraid of the soil with which we are so familiar and where our graves will be in.