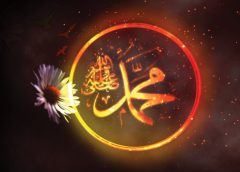 ‘‘Whenever the sounds of swords got louder, and a battle gathered pace, our eyes would search for Rasulullah.’’ says Imam Ali (ra), the Lion of Allah, karramallahu wajhah.

We try to sense it.

Though very slowly, through imagination, we approach the source of courage.

We approach the bravery itself, indeed.

We approach our Prophet’s quality of  ‘‘being the most courageous person of all mankind’’.

Yet, would our eyes search for him like the Sahaba by transcending distances? Take refuge behind him if need be?

Would our hearts beat on the battlefield as much as the Sahabas’?

Have we ever thought about it?

Let’s thinks about it!

Material on one side and the spiritual on the other side.

There is no sound of swords on the spiritual field, but sometimes beats of heart of equivalent value are deeply heard.

It is a spiritual battlefield.

All in all, spiritual.

One thing is the same though: The Great Commander (pbuh).

He is the mountain on which we take refuge.

He is the one whom all eyes searched for in every turmoil.

He is the Imam who connects all the hearts and behind whom people are lined up.

Times have different climates and stages. One thing that does not change: searching for and remembrance of him (pbuh) just as his companions sought for him through battlefields.

Like in each of the past 14 centuries, we are in need of the same consciousness, same perspective and same search in this battlefield of the end times too.

Facing the waves of the ocean of this life, we need the lights of his Sunnah to enlighten our way and be our compass.

At the most intense moments of spiritual jihad, our minds and hearts will take courage by grasping his Sunnah while seeking for him.

The consciousness that he exists among us through his Sunnah will transform battlefields into fields of victory with the permission of Allah.

The pen leads the heart.

Sounds come at the moment of the embrace of pen and paper. What is left behind on the square of mind and heart are a good many intermingled sounds of spiritual battle.

A guiding advance secretly begins and continues in the trench of lines encircled from all quarters.

The struggle is to the same direction, the guide is the same.

It is of course worth being in a spiritual struggle with the pen.

May Almighty Allah make the ink expended by the spiritual personality (of the Risale-i Nur students) be weighed by the measure of the blood of the martyrs, and be on a par therewith on the Day of Resurrection.