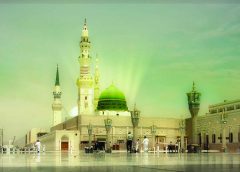 Sunnah is defined as follows: The way lived in and adopted, tradition, character, creation (disposition) temper, way formed of commands and prohibitions. 1 As a term Sunnah means ‘the entire words, actions and approval (taqreer) which are attributed to our master, Prophet Muhammad (pbuh)’. Approval (taqreer) refers to such situations where the Messenger of Allah (pbuh) saw a thing, kept silent and did not reject it. 2

The Sunnah of Rasulullah (pbuh) is the most important source after the Qur’an. In the religion of Islam, the model person to take as an example is our Prophet and the model society is the community of the Sahaba. 3 The life of our Prophet is entirely Qur’an centred. He based his every manner, his every word and his every deed on the Qur’an, and he behaved according to the rulings of the Qur’an. Allah expresses this reality in surah Najm:

“Nor does he speak from [his own] inclination. It is not but a revelation revealed.” 4

Allah commands us to obey His beloved. He clearly states this in the following verse:

“O you who have believed, obey Allah and His Messenger and do not turn from him while you hear [the Qur’an].” 5

Following the Sunnah directly reminds us of the Prophet. Emulating the Messenger of Allah in every matter – even in the most simple ones – from eating to sleeping, reminds us of our Lord, Who has sent him to us as a guide. It makes us feel that we are in the presence of Allah. In this way, our simplest deeds, even our habits, gains the value of worship. 7

The Messenger of Allah said in a hadith, “The Book of Allah was given to me and a similar of it [Sunnah] was also given along with it. It will not take long, someone with full belly on an armchair will one day say ‘The Qur’an is enough for you; whatever halal you find in it, accept it as halal; whatever haram you find in it, accept it as haram’ [thus denying the Sunnah].” 8

Since the Sunnah is the implementation of the Qur’an into daily life, it is a means of right direction for us. Our Prophet declared this in his last sermon before tens of thousands of Sahaba: “I leave behind me two things, the Qur’an and my example, the Sunnah, and if you follow these you will never go astray.” 9

The Prophet is an example; the model person for humanity. Those who obey him actually obeys the Qur’an. Some verses that express this truth are as follows:

“He who obeys the Messenger has obeyed Allah.” 10

“And obey Allah and the Messenger that you may obtain mercy.” 11

“There has certainly been for you in the Messenger of Allah an excellent pattern for anyone whose hope is in Allah and the Last Day and [who] remembers Allah often.” 12

Functions of the Sunnah

There are basically four functions of the Sunnah related to the Qur’an according to the classification which is accepted among the scholars including the scholars of hadith. They are ‘reiteration, interpretation, legislation , and application’.

1. Reiteration and confirmation: Highlighting a ruling and content mentioned in the Qur’an by means of the same or similar expressions.

For instance, the Qur’an commands “And do not consume one another’s property unjustly.” 13 The Prophet reiterates this verse with the hadith “The property of a Muslim is not permissible unless he gives his consent.” 14 For example, Allah says in the Qur’an “O you who have believed, do not consume usury, doubled and multiplied.” 15 And the Messengers of Allah confirms this verse with the hadith “Do not sell one dinar for two dinars, and one dirham for two dirhams.” 16

2. Interpretation and explaining: The Sunnah explains a ruling in the Qur’an when there is need. The hadiths which explain how to perform prayers, fasting, charity and Hajj are examples for this duty of the Sunnah. As a matter of fact, the function of the Sunnah is most seen in the field of interpretation and explaining. “If there were no sunnah, none of us would understand the Qur’an.” 17 This word of Imam Azam Abu Hanifa clearly states that the Sunnah is a requirement to understand the Qur’an.

Umar (ra) wrote the following in his letter to Qadi Shuraih: When an issue is brought to you, rule according to the Book of Allah. If you face a situation which you cannot find in the Book of Allah, rule with the ruling of Rasulullah.”

3. Legislation: This is when the Sunnah gives a ruling about an issue the Qur’an has never mentioned before and does not give a ruling. For instance, a grandmother’s inheriting from a grandchild, the punishment for one who drinks alcohol, the illicitness of the meat of wild animals like birds such as crows and hawks. For these and similar matters the ruling has been given by the Sunnah. You cannot find these matters referred to in the Qur’an.

The Sunnah gives rulings in the matters not mentioned in the Qur’an. For example, when an old woman come and told Abu Bakr (ra) that she wanted to have a share from the inheritance of her grandchild, he said “I do not know any verse in the Qur’an about inheritance from grandchild to grandmother. And I do not know any hadith of the Prophet about it.” Then he asked this matter to the people around him. Mughira ibn Shu’ba (ra) from the Sahaba stood up and said “The Prophet used to give a grandmother one sixth of a share.” When another companion, Muhammad ibn Maslamah (ra), said the same thing, Abu Bakr (ra) gave the old woman one sixth of a share from her grandchild’s inheritance.

The authority of Rasulullah to declare something halal or haram in the light of the general principles of the Qur’an comes from the following clear statement of the Qur’an:

In another verse it is said,

“And whatever the Messenger has given you – take; and what he has forbidden you – refrain from.” 20

These and similar evidences show that all the things the Prophet ordered or prohibited are included in the rulings of the Qur’an. 21

The Prophet taught the companions how to perform daily prayers (salah). He also made decisions for particular cases. The Battle of Badr has an example for this:

4. Application: This when our Prophet implements the rulings of the Qur’an into practice. For instance, he recited the following prayer in the way it is mentioned in the Qur’an 23:

Our Prophet (pbuh) is the most perfect of human beings and his good character is at the top by the confirmation of both his friends and enemies. He is the most distinguished person who enlightens the past fourteen centuries and who is worthy of the title “The Master of Humanity” with his every manner. Our Lord tells us about his good character in the Qur’an: “And indeed, you are of a great moral character.” 25

The reason that has propelled our Prophet to the most honourable position in the sight of Allah and to the highest level among the creatures, is that he is the person who has lived the Qur’an in his life the most. In this respect, our Prophet is a miracle of the Qur’an.

There is the light of the Qur’an in his every behaviour. With all of his excellent qualities guiding humanity, he is a model who was taught by the Qur’an. Almost all of his behaviours, words and attitudes remind one of the Qur’an. He is the most beautiful example for people with respect to understanding and living the Qur’an. In fact, the Qur’an presents him to us as “an excellent example”. 27

One of the defenders of the Qur’an and Sunnah of the last century, Imam Bediuzzaman Said Nursi says the following about the Sunnah in his work called The Sunnah al-Saniyya Epistle:

“For sure that person’s practices (pbuh) and actions are the finest examples to be followed, and the safest guides, and the soundest laws to be adopted as principles. Happy is the person who has a large share of following the Prophet’s practices (pbuh). While those who are lazy and do not follow the Sunnah have great loss, and those who consider it to be unimportant commit a great crime, while if they criticize it, which infers denying it, it is serious misguidance.” 28

Finally we pray to Allah as follows:

“Our Lord, we have believed in what You revealed and have followed the Messenger, so register us among the witnesses [who accept You and Your messengers].” 29 Amin!

One thought on “Four functions of Sunnah”