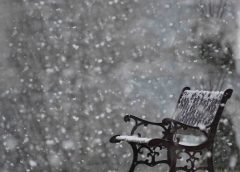 Through the deceit of illusion, humans suppose themselves to be immortal. The idea of not dying results in seeing the passing of time as only the change of calendar pages, fancying that the old age and death are the problems of others and having a feeling that both their personal world and the real world outside will never disappear. In reality, however, this idea gives the result of the illusion of feeling immortal.

My grandfather would not wish anything which was offered to us as kids; those things would never get his attention. Candies, fruits or toys… His being uninterested in these things would really astonish me. I could not understand it as a child. As the years passed, the grim reality appeared. I understood that the world of childhood for my grandfather had disappeared. His world of adulthood and old age were alive.

My illusion of feeling immortal appears right at this point; during the periods of my worlds’ disappearing one by one, the outside world does not seem to change at all. The continuous nature of the outside world makes me feel like my own world will never come to an end. However, when I take a mirror in my hand and turn it to a view I like, the better the quality of my mirror, the more wonderful I see the view in my mirror. Any small breaking or tint can ruin that image in my mirror. The fact is no matter how worse the image in my mirror gets, the real view in the outside world continues to exist.

Our own world and life, which is our mirror, can change or be destroyed with a small move – that is we may die any moment. The continuation of the outside world with all its glory will not help us. Although the changing numbers, rising buildings, changing politics give the feeling that the world will continue for eternity, it is just a matter of breaking of a glass in our life that we will see the painful side of the world. Supposing that our personal life will be as long as the outside world is nothing but deceiving ourselves. If we do not realize it, our world will be destroyed all around us with its entire burden.

The greatest solution to this seems that we should make every period of our lives as such that they can give us eternal worlds. And this is only possible by relying on Allah, Who is the Creator and Lord of all worlds, obeying Him and acting according to His commands. Taking the life of His Beloved, Prophet Muhammad (pbuh), as an example will transform our transient lives into eternal worlds of happiness.